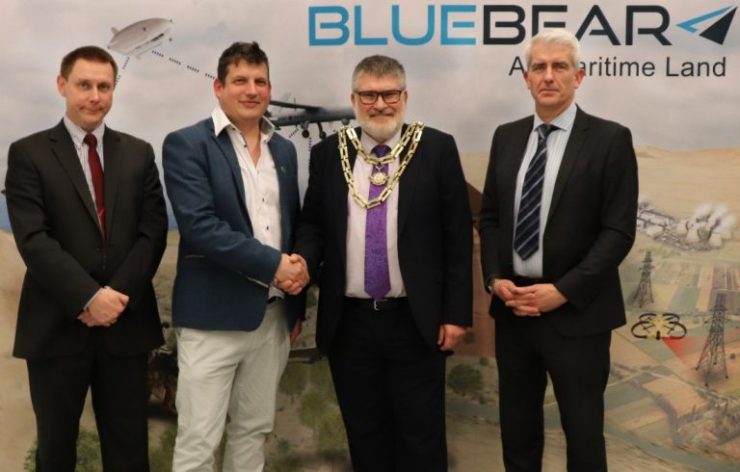 “The UK government Department for Digital, Culture, Media and Sports has allocated over £200 million to develop 5G test beds. This has allowed Blue Bear to establish the first 5G enabled air corridor for drone testing in the UK at the National BVLOS Experimental Centre (NBEC). Blue Bear are part of the 5G Rural Integration Test-bed (“5GRIT”) consortia which is trialling innovative use of 5G technology in a range of applications to connect rural communities and unlock their potential.”

David Walters, Blue Bear’s Operations Manager said “We are flying drones in agricultural regions of Cumbria to monitor the health of livestock and to survey crops and investigating how 5G can help transport large volumes of ‘Big Data’ to anywhere in the world. In the future farmers will be able to remotely task the drones to carry out routine tasks and analyse results from the breakfast table”.

The NBEC 16Km air corridor connects Blue Bear’s Twinwoods Flight Test Centre and Cranfield University’s Airport and allows drones and manned aircraft to share the same airspace. Blue Bear executed the first BVLOS flights from the NBEC in December 2018. The company will continue to instrument and gain flight hours along the air corridor throughout early 2019 with support from the NBEC Consortia and the UK CAA. Different types of 5G technology are being used to track and identify drones along the corridor, as part of a multi-technology solution for the provision of a Recognised Air Picture from Blue Bear facilities. Thales’s holographic radar will form a part of this solution, as will the provision of mobile 5G solutions from Vodafone.

Ian William-Wynn, Managing Director of Blue Bear, said “Blue Bear first flew their drones BVLOS in 2009. We opened NBEC to allow other drone operators and equipment suppliers to fly and test their next generation technology in managed environments and scenarios representative of real operations. This facility will accelerate the uptake of UK’s latent drone technology and infrastructure in global markets.”