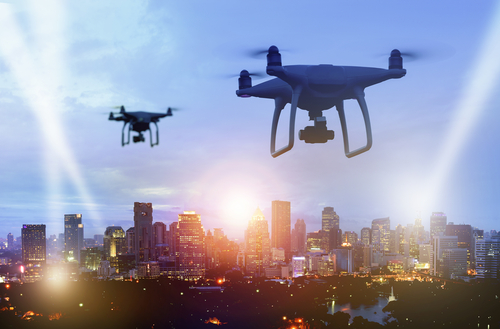 The International Transport Forum at the OECD (https://www.itf-oecd.org/uncertain-skies-droneshas has published a new report outlining some of the regulatory and market issues facing commercial drone operators over the next few years, especially in reference to drone operations in cities.

“The case of urban operations by commercial drones best exemplifies the trade-offs emanating from different regulatory approaches and deserves a specific discussion…” says the report. “Whereas manned aircraft are normally allowed to fly over cities (with exceptions due to noise regulations at night), public safety concerns have prevailed in the case of drones. Safety concerns are mitigated by the low altitude at which drones fly. Conventional aircraft are not allowed to fly at such low heights, making it easier for air traffic managers to develop ‘drones only’ urban airspace. Nonetheless, unless autonomous collision avoidance systems and drone-to-drone communication systems cannot be shown to work reliably, zero risk under an outright ban is the only acceptable level of risk that regulators are willing to accept even when the likelihood of airplane-to-drone crashes is very limited. It also matters that the connectivity needed for drones to stay electronically connected to their pilots in congested, built-up areas over significant distances is expensive and so the only economically viable way for drones to retain their competitive advantage is to rely on fully autonomous aircraft in dedicated airspace (Forbes, 2017). However, in a similar fashion to insurance markets, regulatory agencies will only be able to relax requirements as the body of evidence on drone crashes and their impacts grow.”

“Paradoxically, restrictive regulations are putting a break on the possibility of observing and collecting the outcome of real-life occurrences and creating more evidence-based approaches to safety. Several drone operators have simply stopped developing their business cases for urban settings as a result of those very restrictive rules.

“The outright ban to fly over cities also raises a critical question of regulatory responsibilities: Which jurisdiction applies to urban drone operations – national regulations or local authority rules? This is likely to become one of the greatest challenges for regulators and policy makers over the coming years. Recent legal research in the United States shed some light on the potential magnitude of this challenge. In the United States, there is a likely conflict of jurisdiction between federal laws and rules by the FAA and state law. In the aviation context, federal law generally pre-empts state law (Perritt, Jr. and Sprague, 2015). However, state and municipal authorities may find that they have the power to regulate certain aspects of drone operations as part of a complex matrix of responsibilities (Box 2).

“…In Europe, some city governments have obtained derogations from civil aviation authorities to run public events dedicated to hobbyist drones, such as Paris opening up its parks to drone owners on Sundays during the summer, as part of the plan ‘Paris, capital of start-ups’. When it comes to commercial operations, the typical procedure involves the drone operator obtaining a national licence from the civil aviation authority; subsequently, the operator can apply to the local prefecture (Interior Ministry local office) for a case-by-case approval of operations in a given area of the city for a limited amount of time. The third instance in which responsibilities may be unclear is for operations within a city, but not in an open/public space. For example, both civil aviation and local authority rules may not apply in the case of operations taking place within a closed urban space, such as a factory, a hangar, or a shopping centre. Developing drone infrastructure Regulatory issues and jurisdictional questions are inevitably linked to infrastructure development.

“To use drones for transport in urban areas, vertical take-off and landing are a must (The KiM Netherlands Institute for Transport Policy Analysis, 2017). Vertical take-off may be at odds with high-rise development and densification of urban areas, while landing sites will compete with other priorities for the allocation of scarce land resources. In this context, land-use planning and interactions may be more of a barrier to commercial drone development than airspace management and city planners and regulators will need to work together to address the challenges of urban infrastructure for drones. The public and the private sector alike may come up with solutions. For instance, cities may start planning for dedicated aerodromes and build those similarly to car parks. If landing sites remain under public ownership, sub-national authorities will have more direct powers to regulate drone conduct and to specify where drones may take-off and land in a city. Once again looking at case law in the United States provides support for the proposition that states and municipalities have the authority to regulate airport siting vis-à- vis federal agencies (Perritt, Jr. and Sprague, 2015).

“Privately developed, drone-friendly urban sites have not yet been built but new concepts are emerging. A droneport prototype designed by the Norman Foster Foundation in collaboration with universities worldwide and exhibited at the Venice Arsenale in 2016 consists of a traditional brick structure with vaulted shelters. The government of Rwanda has identified a site and contributed funding to the project (Norman Foster Foundation, 2016). The idea is to create a network of droneports to deliver medical supplies and other necessities to areas of Africa and other continents that are difficult to access due to a lack of transport Case law provides some potential answers.

“States or municipal legislation or rules that target drones are more likely to be pre-empted than a statute or regulation of general effect, such as relating to noise, taxation, or environmental protection. Moreover, pre-emption is less likely if a state narrowly targets a particular highly localised area of drone operations, and relates it to matters of traditional state concern, such as personal privacy, or security of property occupancy. Limiting the purposes for which drones may be flown, for example, prohibiting flights for surveillance or to capture imagery of a particular individual, might be permissible. States and municipalities may not, however, regulate the height at which drones can be flown. Because the FAA prescribes a maximum height above ground level, justified by reducing interference between drones and higher flying manned aircraft, these requirements would be pre-empted.

“On the other hand, a state or local rule establishing a minimum height is less likely to be pre-empted because there is no FAA-established minimum height, and because of traditional police power to regulate land use.”