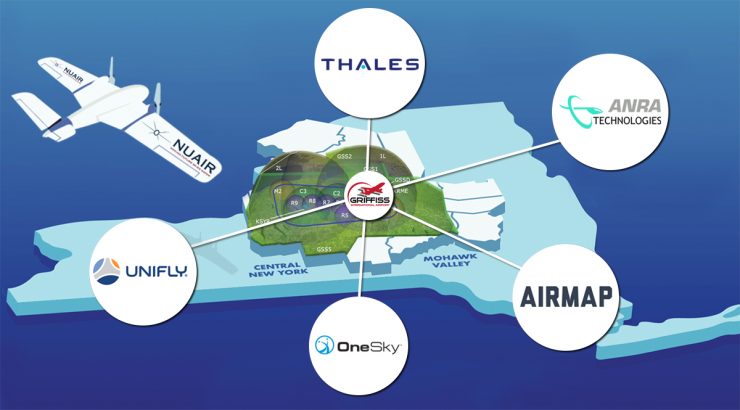 “Currently, there are two predominant UTM models, the National Aeronautics and Space Administration (NASA) UTM Concept and the European U-Space Model,” said NUAIR in a press statement. “Having both types of UAS service suppliers at the New York UAS Test Site gives it the ability to test against each model independently, collect data and develop a way for the two to coexist and interoperate smoothly. This opens the doors for companies from across the globe to come to Central New York, test their drone technologies and help build an interoperable, global, UTM system.”

“New partners, new investment and new technologies have opened the door to the New York UAS Test Site and NUAIR to do business with practically any drone company in the world,” said Oneida County Executive Anthony Picente.

“Having multiple UAS service suppliers leveraging our command and control infrastructure at the test site allows for any company to test their drone technology, regardless of the platform or service supplier,” said Tony Basile, chief operations officer at NUAIR. “These partners provide capabilities that allow the New York UAS Test Site to collect mission data, test cross-communications between platforms and allows a wider range of operators to use our facilities and advance the UAS industry.”

“As UTM ecosystem industry consensus standards evolve, we need a place where industry can conduct disciplined testing to validate performance requirements and eventually verify UAS service suppliers or supplemental data service providers as compliant with those standards,” said Andy Thurling, chief technology officer at NUAIR. “This will streamline FAA performance authorizations and enable widespread commercial use of UTM in the New York UTM Corridor and beyond.”