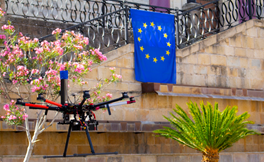 VVA, together with GMV and CATEC, has been contracted by the European Commission’s DG GROW to provide support to the standardisation actions for European global navigation satellite systems (GNSS) EGNOS and Galileo in the drone/RPAS/UAV sector. This project was launched in September 2018 and ran until the end of September 2019. It falls under the overall context of the Space Strategy for Europe, adopted by the Commission in October 2016, and focuses on the aviation segment, more specifically on drones. The project is a contributor to the U-Space Network of Demonstrators set up by the European Commission.

On the 25 and 26 of June, the third drone trial of the EGNSS4RPAS took place in the urban environment of Villacarrillo (Spain), putting the UAV in a more demanding environment compared to the previous two which were held at the ATLAS facilities nearby.  Over the two-day timeframe, a single multicopter UAV was used to perform 10 different flight plans with the following main objectives:

Based on the technical analysis that followed these different flight plans, several conclusions have been derived (see table and figure below for more information). Despite having fewer satellites available, the Galileo-alone solution already provides significantly better performances than the GPS-alone solution. However, the performances for the combined GPS and Galileo solution yield an even greater improvement versus the GPS-only solution. 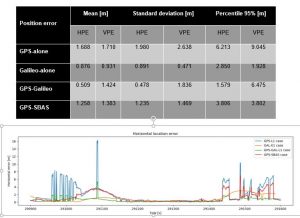 Another observation across the different flight plans is that although adding EGNOS in the solution provides improvements compared to GPS-only (both on the horizontal and vertical level), GPS and EGNOS does not provide better performance than GPS and Galileo.

Performance is in general very stable for the in-flight phase. Error spikes correspond to the take-off and landing phases, where the multipath and satellite visibility clearly impact the performance.

The achieved Protection Levels (PLs) with the single frequency (SF) solutions both at the horizontal and vertical level are in general below the minimum requirements as defined for aviation LPV-200.

For the SF GPS and Galileo solution, 100% of availability was achieved for all flight plans. The chart below provides an overview of the number of satellites that were visible during the trial. Satellite visibility is key for the solution’s availability.

Following the analysis of all 10 flight plans for both the single and dual frequency solutions, the following conclusions and recommendations can be drawn: