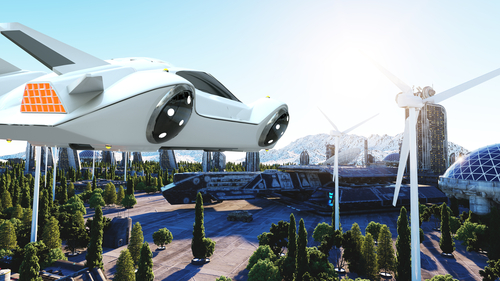 Bloomberg reports (https://www.bloomberg.com/news/articles/2018-08-24/uber-airbus-are-said-to-be-enlisted-in-japan-s-flying-car-plan) that the Japanese government has set up a committee to look at how flying cars and air taxis can be integrated into the country’s transport system.

“Japan is making a push to develop flying cars, enlisting companies including Uber Technologies Inc. and Boeing Co. in a government-led group to bring airborne vehicles to the country in the next decade.

The group will initially comprise 21 businesses and organizations, including Airbus SE, NEC Corp., a Toyota Motor Corp.-backed startup called Cartivator, ANA Holdings Inc., Japan Airlines Co., and Yamato Holdings Co., according to a statement Friday from the trade ministry in Tokyo. Delegates will gather August 29 to help chart a road map this year, it said.”

“The Japanese government will provide appropriate support to help realize the concept of flying cars, such as creation of acceptable rules,” the ministry said….Japan’s Economy Minister Hiroshige Seko told reporters this month that flying cars could ease urban traffic snarls, help transportation in remote islands or mountainous areas at times of disasters, and can be used in the tourism industry.”