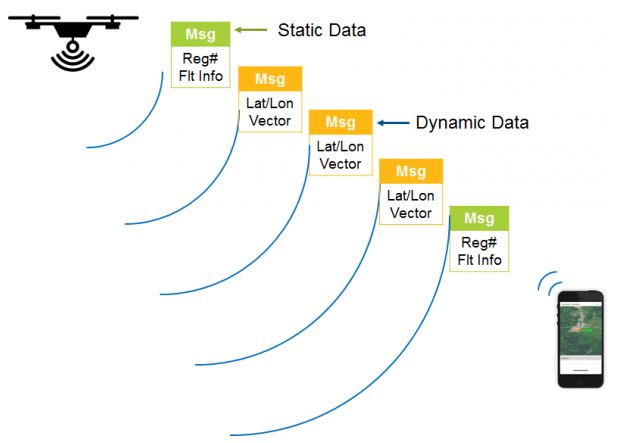 Intel has announced it has flown the first public demonstration of its Open Drone ID, an open standard that offers a solution for the remote identification and tracking of UAS using Bluetooth. The demonstration was part of a 15 August Choctaw Nation media event to show progress on Integration Pilot Program work.

Open Drone ID, according to Intel, is designed as an open standard beacon-based (wireless drone identification) solution that enables drones to be identified when within range of a receiver, like a smartphone. The current draft specification is based on Bluetooth 4.2 broadcast packets and Bluetooth 5 (long-range) advertising extensions. With this technology, each aircraft can broadcast its unique ID, location, direction, altitude, speed, make/model, base location and other related data.

The Open Drone ID project is managed through a workgroup within ASTM, an international standards body. Intel is leading the ASTM F38 Remote ID Standard and Tracking Workgroup. It is important that Open Drone ID is a global standard, like Wi-Fi or Bluetooth, to provide broad scalability to many end users and use cases.  More information can be found at the Open Drone ID website.

“Open Drone ID is a project to provide a low cost and reliable “beacon” capability for drones so that they can be identified when within range of a receiver.  The implementation is based on Bluetooth* 4.2 Broadcasts Packets (Advertisements) and Bluetooth 5 (long range) Advertising Extensions. Such advertisements can be used by the general public, law enforcement, critical infrastructure managers, ATC, or other drones to give better situation awareness of the airspace around them.

“The information (messages) sent is divided into static and dynamic data where the static data is broadcast less frequently than dynamic data. These messages are “connectionless advertisements” that do not require any acknowledgement from the receiver. While Bluetooth 4.2 has a range limit of 200-300m, Bluetooth 5 long range can go 4x the distance.  In the Open Drone ID specification, the drone is required to implement both BT5 and BT4 approaches (using BT5 hardware) so that basic receivers (like current cell phones) will work as well as new ground-based and new phone receivers that can take full advantage of the range improvements with the newer Bluetooth standards.”