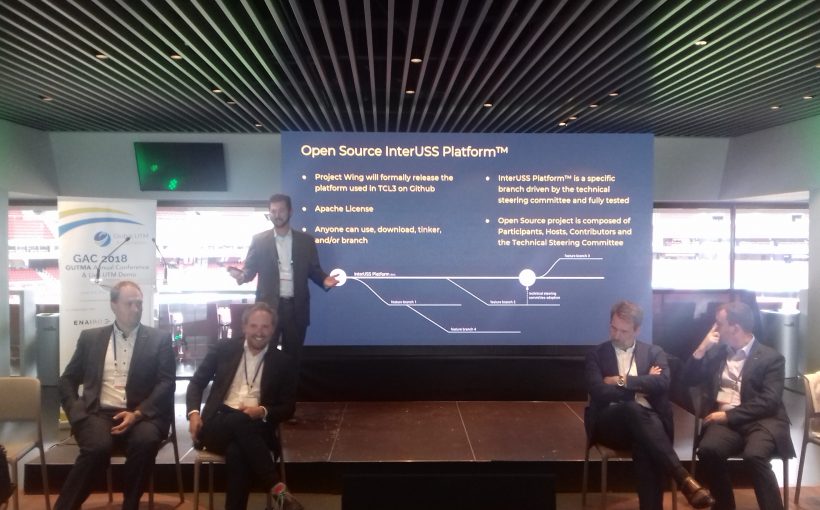 Five UAS service suppliers (USSs) have joined together under the sponsorship of Google’s Project Wing to develop a global, grid-based USS-USS open-source communications platform, called InterUSS Platform ™ as a first stage in de-conflicting drone flights anywhere in the world, no matter which USS has the authority for UTM operations in a particular country or area.

The system divides the world into 750m grids; when a drone connected to a UTM platform provided by AirMap, Altitude Angel, PrecisionHawk, Skyward, Unifly and Project Wing enters the grid a message will be sent to other USS operators to alert them. The system uses the Apache License permissive free software, to allow de-confliction operations to take place on a machine-to-machine basis, using the algorithms developed by each service provider, and will be opened up to new partners in the coming months, with Global UTM Association (GUTMA) providing support in this area.

The work builds on a NASA TCL 3 UTM research programme which took place in April 2018 where flights flown using Project Wing’s and AirMap’s UTM platforms were safely routed around each other. The two USSs operated in the same airspace and connected directly to share safety information for cooperative separation while protecting operator and consumer privacy.

“The research showed we could share information between USSs, second we could do without a centralised database which stored all the data in one place and third we can build it so as it grows this can scale up to accommodate future traffic,” according to Kevin Hightower, Project Manager, Project Wing.

The announcement came at the end of the first day of GUTMA’s annual conference, being held in Madrid, Spain, whose significance to the future of the transport sector was likened by GUTMA president Jonathan Evans to the importance of the 1884 International Meridien Conference, organised to determine an international reference point for railway timetables and which became the starting point for the setting-up of global time zones.

While future UTM concepts were discussed (“Do we even need a UTM system?” asked Michael Currie of Bangkok-based Fling, “as we will soon be able to apply artificial intelligence solutions to teach drones to autonomously avoid obstacles”) the more pressing issue of setting up a globally-harmonised registration system for operators, pilots and drones themselves within the next few months was debated.

GUTMA’s Hrishikesh Ballal has been leading a working group into this and concluded civil aviation authorities (CAAs) had three options in deciding how to develop such a registry – maintain their own registry, buy technology from a vendor or delegate the whole job to a third party.  But without global consensus CAAs have different views on – and are at different stages in – developing directories which will have to be globally compatible. In Switzerland, SITAONAIR is developing a drone directory for the aviation administration, said the company’s Thierry Bontoux, and would have the preliminary version complete by October this year. Finland had also started the process but other CAAs were still waiting for guidance. European Union countries will require operators flying drones in the “specific” category to be registered but there continue to be issues around the role of law enforcement agencies and other local and national government bodies, all whom have different data demands. Koen de Vos of the European Commission said the European Parliament had insisted on making registries interoperable and the Commission is looking at ways to make it even more interoperable, including introducing performance-based rules to provide the standards. “We have to say what the common fields are and what the register should be used for.” He would like to have some European Aviation Safety Agency (EASA) input into the final format – but not too much. EASA is a regulator and not an operator.

One country which does have an operating drone registration system in place is Dubai. Michael Rudolph of the Dubai Civil Aviation Authority highlighted some of the complexities involved in setting up such a directory – these include monitoring the trading and transfer of drones between operators, allowing tourists to fly their own drones (after appropriate security vetting and skills assessments) and sharing this data with other states – other United Arab Emirates States had yet to develop their own directories.

Dubai has 4,600 registered operators – all of whom had received training. The government has set an ambitious target of 2020 (in time for Expo 2020) for the start of commercial air taxi operations but the DCAA and its technical partner Exponent were on course to deliver an operational UTM system to support air taxis by this date. A key component of this, according to Ayhan Kamil of Exponent, was the 59 gram tracking and identification device fitted to each commercial and government drone which is integrated into the local mobile network.  If the drone deviates from the agreed height or track profile an alert is immediately sent to the DCAA identifying the offending drone and its operator.  Drone operators use a common dashboard to map out the area in which they want to fly and the DCAA can automatically authorise flight requests, charging operators on the amount and complexity of airspace requested. Although the system is highly automated the DCAA employs a team of five operators to monitor airspace requests.

The rules around future access to airspace at low level have yet be written – and are proving controversial. For many air navigation service providers (ANSPs) “unmanned traffic management” should be “unified traffic management” with UTM not limited to drones but incorporating general aviation operations which today are allowed to fly freely outside controlled airspace. “Growth will stagnate unless we tackle this issue and encourage regulators and ANSPs to consider wider implications for other users of uncontrolled airspace,” said Andy Sage of NATS, noting that segregation is no guarantee of safety. There were over 1,100 controlled airspace infringement in the UK in 2015, he said, with each delay resulting in disruptions to up to 30 commercial flights. The UK was on course to deliver a unified traffic management service by 2019. But Susanne Schödel, Secretary General of the Féderation Aéronautique Internationale (FAI) said if sports aviation and other general aviation aircraft operators had to file flight plans and add new equipment to their aircraft that would go against the entire philosophy of flying as freedom – and free access to low level airspace.

Karthik Balakrishnan of Airbus Altiscope spoke of the imminent issue of dealing with huge numbers of drones which are about to appear in the skies. If just 5% of Paris inhabitants were early adopters of drone services that would mean 1,300 flights per hour in small areas of airspace.  “If you don’t de-conflict flights before your start you can spend 22%of the flight time avoiding conflicts,” he told delegates.

Masahide Okamoto of Hitachi outlined the plans underway to develop ISO standards for UTM. Carlos Hernandez Medel of everis suggested access to airspace should be based on the business model of operators while Shinji Nakadai of NEC Corporation proposed access could be managed on the basis of auctions by commercial operators, with police and emergency services prioritised. Alexander Bilous of Aeronyde proposed new ways to differentiate levels of automation and autonomy and Richard Parker of Altitude Angel and Marc Kegelaers of Unifly outlined some of the outstanding issues which the UTM sector still faced.