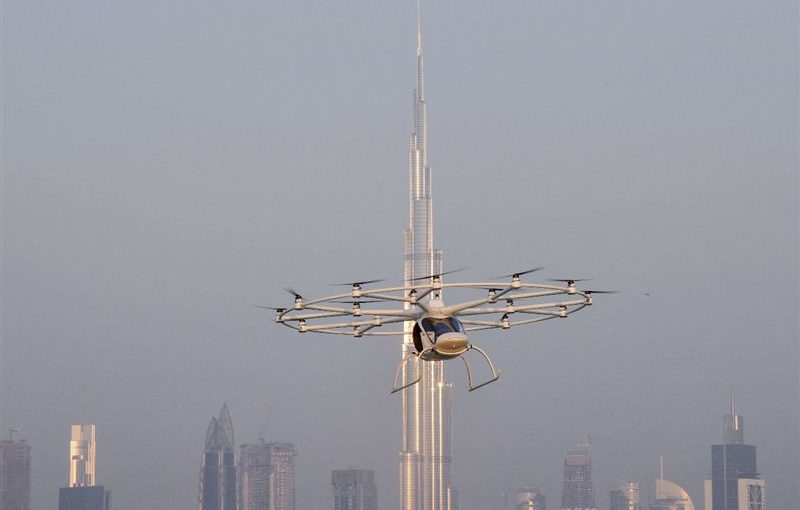 The Government of Dubai’s Media Office has announced that the first concept flight of the Volocopter Autonomous Air Taxi (AAT), a vehicle that will be used for the world’s first self-flying taxi service set to be introduced by Dubai’s Road and Transport Authority (RTA) took place on 25 September, with Crown Prince HH Sheikh Hamdan bin Mohammed bin Rashid Al Maktoum in attendance.

“After the remarkable success of the first driverless metro in the region, we are glad to witness today the test flight of the Autonomous Air Taxi,” said HH Sheikh Hamdan.

HE Mattar Al Tayer, Director-General and Chairman of the Board of Executive Directors of the RTA said: “The Autonomous Air Taxi has a variety of unique features that include top security and safety standards, and multiple redundancies in all critical components such as propellers, motors, power source, electronics and flight controls. It is also fitted with optional emergency parachutes, nine independent battery systems, and a battery quick-charge and plug-in system, which takes two hours to reach full charge in the prototype version, a time that will be significantly reduced in the production version.”

Powered by electricity and featuring low noise levels, the AAT is an environmentally-friendly vehicle. Its current prototype version has a maximum flight time of approximately 30 minutes at a cruise speed of 50 km/h, and a maximum airspeed of 100 km/h. All these features will evolve in the production vehicles. The AAT measures about two meters in height, and the diameter of the rotor rim, including propellers, is just over seven meters.

His Highness Sheikh Hamdan was briefed about the integration of the AAT with public transport systems such as the Dubai Metro, Dubai Tram, public buses, marine transit modes and taxis. The briefing also covered the procedures for making the AAT service available to the public through a smart mobility app. The app will allow customers to book flights, receive booking reference details and track the route of the AAT.

Over the next five years, the RTA will collaborate with the UAE General Civil Aviation Authority and the Dubai Civil Aviation Authority to ensure that the operational requirements for implementing AAT services are put in place. These requirements include developing laws and policies governing certification of the aircraft and AAT operations at an Emirate and Federal level, defining aerial routes and corridors, designing and locating take-off and landing points, setting standards for official operators of AAT services in Dubai, identifying the roles and responsibilities of stakeholders, and specifying security and safety standards for the AAT.

Al Tayer revealed that the RTA has appointed US-based JDA Aviation Company, an autonomous air-vehicle safety specialist, to oversee preparations for AAT flights and manage safety. The trial operations and the process of developing legislation for this type of vehicles will stretch across five years, during which comprehensive operational, security and safety measures will be put in place, noted Al Tayer.