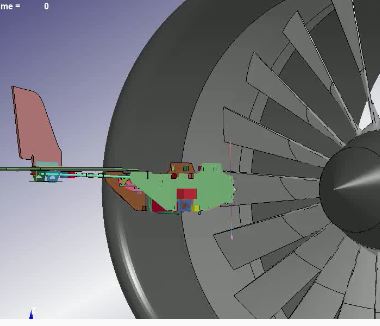 A research team from the Alliance for System Safety of UAS through Research Excellence (ASSURE) has released a report (http://www.assureuas.org/projects/deliverables/sUASAirborneCollisionReport.php) that concludes that drones that collide with large manned aircraft can cause more structural damage than birds of the same weight for a given impact speed.

The Federal Aviation Administration (FAA) will use the research results to help develop operational and collision risk mitigation requirements for drones. ASSURE conducted its research with two different types of drones on two types of aircraft through computer modelling and physical validation testing.

Unlike the soft mass and tissue of birds, most drones are made of more rigid materials. The testing showed that the stiffest components of the drone – such as the motor, battery and payload – can cause the most damage. Concentrating those masses on the drone can also cause greater damage, the researchers found.

The research team evaluated the potential impacts of a 2.7-lb. quadcopter and 4 lb. quadcopter; and a 4-lb. and 8-lb. fixed wing drone on a single-aisle commercial transport jet and a business jet. They examined impacts to the wing leading edge, the windshield, and the vertical and horizontal stabilizers. The windshields generally sustained the least damage and the horizontal stabilizers suffered the most serious damage.

The structural damage severity levels ranged from no damage to failure of the primary structure and penetration of the drone into the airframe. However, the research specifically did not explore the risk to flight imposed by that damage. The researchers concluded that unmanned aircraft system manufacturers should adopt “detect and avoid” or “geo-fencing” capabilities to reduce the probability of collisions with other aircraft.

The team conducted a preliminary computer simulation to evaluate the potential damage to engine components if a drone is ingested into an aircraft engine, including damage to fan blades, the nacelle and the nosecone. They plan future additional research on engine ingestion in collaboration with engine manufacturers, as well as additional airborne collision studies with helicopters and general aviation aircraft.

“Computer simulations, supported by material and component level testing, were conducted to determine the effects of sUAS impacts on manned aircraft,” said Gerardo Olivares, Ph.D., Director, Crash Dynamics and Computational Mechanics Laboratories at Wichita State University. “Conducting this study through full-scale physical tests would not have been possible from a cost and time perspective due to the immense complexity of the task.  On the other hand, simulation enabled us to study over 180 impact scenarios in a twelve-month period. To ensure results accurately predict the actual physical behaviour of collisions, we have spent a lot of time developing, verifying, and validating detailed models of manned and unmanned aircraft. Once the models are validated, we can use them in the future to investigate other impact scenarios.”

According to ASSURE, researchers observed various levels of airframe and engine damage in all sUAS collision simulations. They confirmed that energy (projectile mass and velocity) and the stiffness of the sUAS are the primary drivers of impact damage. This research showed that the severity of the collision is also dependent on the design features of the sUAS and the dynamics of the impact.

Commercial aircraft manufacturers design aircraft structural components to withstand bird strikes from birds up to eight pounds for the empennage and four pounds for windscreen. ASSURE simulations show sUAS collisions inflict more physical damage than that of an equivalent size and speed bird-strike. sUAS components are much stiffer than birds, which are mostly composed of water. Therefore, bird-strike certification regulations are not appropriate for unmanned aircraft. Additionally, regulators do not require and manufacturers do not design commercial and business aircraft to withstand collisions from other aircraft.

The ASSURE research team also conducted both physical testing and simulation on sUAS lithium batteries. Typical high-speed impacts caused the complete destruction of the battery, therefore, in these cases, there was not an increased risk of fire due to a shorted battery.  However, during some of the low-speed impacts, associated with landing and takeoff, the battery was not completely destroyed. In some of these simulations, the battery remained lodged in the airframe and there was potential for increased risk of battery fire.

“The findings above show the importance of properly researching and regulating the use of sUAS in a crowed national airspace system,” said the research consortium.”While design features can decrease the severity of a drone impact, sUAS pilots and the public must be aware of and abide by regulations for safe sUAS operations. It is critical that everything be done to keep these collisions from occurring through the safe separation of all aircraft, both manned and unmanned. The FAA will depend on the sUAS community to help develop the technology for proper detect-and-avoid so that these aircraft do not meet in flight.”

This is the first in a series of research projects conducted to understand and quantify the potential severity of airborne collisions. Future studies will research the severity of collisions with general aviation (GA) aircraft, rotorcraft, and high-bypass turbofan engines representative of those found in airline fleets today. Because of the scope and magnitude of this research, and the impact it will have on industry and national airspace safety, the follow-on studies will be broken into multiple phases beginning this year and running through FY21.