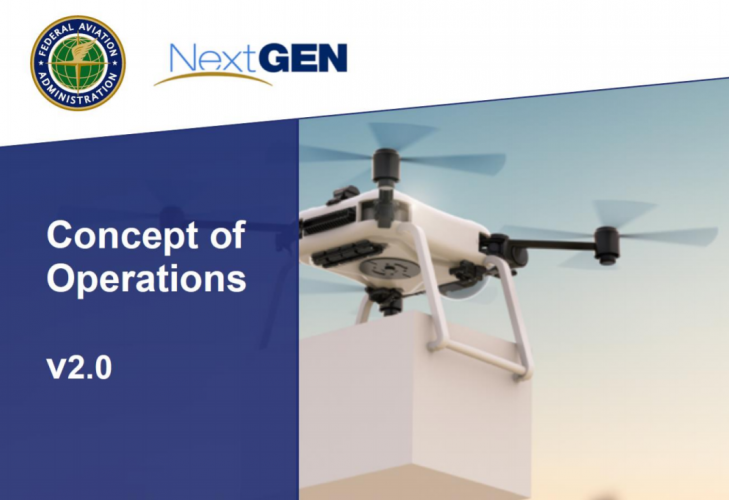 The US Federal Aviation Administration (FAA) has published the second edition of its Concept of Operations for UAS traffic management (UTM). This update from the 2018 edition contains some important additions – such as how the UTM system can be configured to remotely identify UAS  and methods by which a private citizen or a federal public safety agency can obtain information about UAS operations.

According to the executive summary:

In particular, the new concept of operations provides more detail on how UTM service providers will be authorised to manage different levels of airspace complexity and integrate remote identification in their airspace management processes. It also explores ways in which BVLOS operations will be supported.

The FAA may scale their direct regulatory involvement according to the complexity of a proposed operation. For lower risk operations (e.g., VLOS, rural, low traffic density, and/or sparse population/property on the ground), Operators could self-declare compliance to standards – and USSs could assist with formulating these declarations – to ease direct FAA oversight. The FAA grants a Performance Authorization when the desired performance can be achieved. FAA regulator involvement may vary with time and understanding of the proposed operations. They may be more involved initially, and less as time goes on – similar to manned aviation where novel concepts are more heavily scrutinized until the approvals become routine….Once granted a Performance Authorization, the Operator conducts flights within the Authorized Area of Operation (AAO), which is a geographical area with discretely-defined boundaries. It is possible to have more than one AAO under a single Performance Authorization. Separate AAOs under an Operator’s Performance Authorization may have different levels of performance based on the underlying infrastructure.”

An Operator transmitting via network publish sends an RID Message to a USS that has been qualified by the FAA to provide RID services – termed an RID USS. The RID USS makes the RID message available to all other RID USSs, and vice versa, such that the complete set of messages held by these various USSs comprises a distributed database. The general public may utilize services provided by RID USS; an example of a potential service would be a cell phone application supporting queries to publicly-accessible data. Any query through a single RID USS results in a return of all transmitted RID messages that conform to the bounds of the query, regardless of the original RID USS that received each transmission. Additionally, the FAA is able to query RID USSs via the USS Network for relevant RID Messages when such information is needed.

Operators planning to fly BVLOS are required to share operation intent with other Operators/airspace users via the USS Network. Intent data predominantly consists of the spatial and temporal elements of an operation. At a minimum, operation intent includes Operation Volume segments that make up the intended flight path. Operation Volumes are 4D blocks of airspace that have specified entry and exit times for the Operator’s UA. These volumes may be stacked in sequence such that one volume’s exit time coincides with the entry time of an adjacent volume along the flight path; the result is that each Operation Volume in the sequence comprises a segment of the overall flight profile.