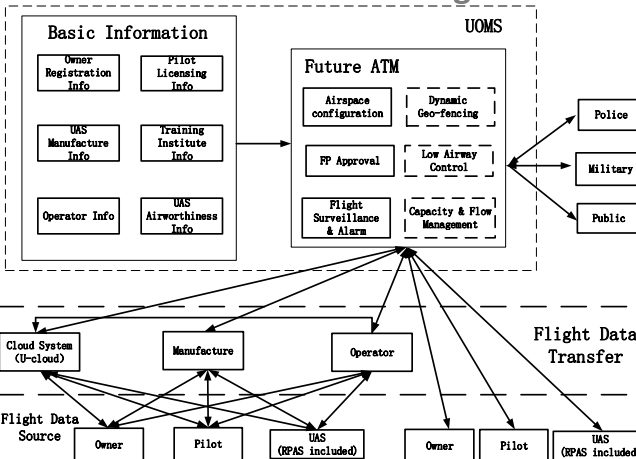 Details on the development of China’s Civil UAS Aviation Operation Management System (UOMS) have been published  by Blyenburgh & Co as part of the proceedings of the recent EU-China APP Drone Workshop https://rpas-regulations.com/community-info/china-eu-china-app-drone-workshop-180606-08/ , which was held between 6-8 June 2018 in Shenzhen, China. In a presentation by Dr Jianping Zhang, of the ATM Engineering Technical Research Institute, Civil Aviation Administration of China (https://rpas-regulations.com/wp-content/uploads/2018/06/1.2-Day1_0910-1010_CAAC-SRI_Zhang-Jianping_UOMS-_EN.pdf) the UOMS UTM traffic management system will be integrated within the CAAC’s General Aviation Flight Service (GAFS) system and current ATM system.

Work underway to progress the development of the UOMS network includes drawing up standard specfications for the data interface between the U-cloud – where drone flight information is stored – and UAS operations and developing a geo-fencing system which will be built into the flight control system. According to Zheng Zhigang of standards authority CASTC, in a further presentation, the geo-fencing system is based on Real Time Kinematics (RTK) high precision-positioning techniques.

The EU-China APP programme seeks to develop closer cooperation between EASA and the CAAC. Initiated on 15 September 2015, the EU-China APP has a duration of five years (2015-2020) and an EU budget of EUR 10 million.