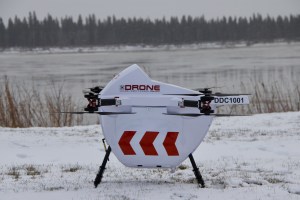 Drone Delivery Canada has anounced that Transport Canada has accepted the company’s Declaration of Compliance for the X1000 Sparrow cargo delivery drone. This unmanned aircraft system (UAS) is now compliant with the Transport Canada UAS standard. Achieving Compliant UAS Operator status is the first requirement for being permitted to conduct Beyond Visual Line-of-Sight operations.

During recent research and development flights, the X1000 (The Sparrow) has demonstrated a history of safe operation in some of the harshest environmental conditions in Canada’s north, according to the company, and is the first cargo delivery drone of its kind to be accepted under the Transport Canada, Compliant UAS programme.