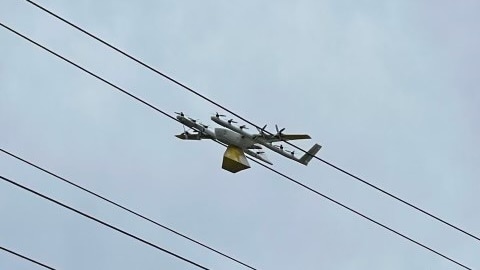 A Wing delivery drone crashed into powerlines in Brisbane, Australia, yesterday cutting of power supplies to over 2,000 people, according to news reports. Electricity infrastructure supplier Energex told ABC Radio that a drone carrying food hit the network about 2pm but the company restored power for about 2,000 customers within 45 minutes, while 300 customers in the immediate vicinity of that drone were without power for three hours.

Energex spokesman Danny Donald said this was the first time this had happened, that there was no permanent damage to the network and his company would not be requesting the food delivery company to cover the damage.

According to a press report, a spokesperson for Wing said a drone made a “precautionary controlled landing yesterday … and came to rest on an overhead power line…We immediately reported this to Energex, who attended the location… “Two hours later, during the retrieval process, there was a power outage in the area. We’re sorry for any inconvenience caused. We’re currently conducting a review of yesterday’s event.”

Energex is an enthusiastic operator of drones itself. Earlier in September it announced it was launching a new fleet of infrastructure inspection drones  to locate damage undetectable with the naked eye through thermal imaging cameras and “installing lifesaving markers on powerlines and help keep people safe during flooding.”

Energex Technology Manager Rob Ibbs said the latest drone fleet is helping the organisation prepare the power network for summer and will help crews undertake tasks much safer and quicker than ever.