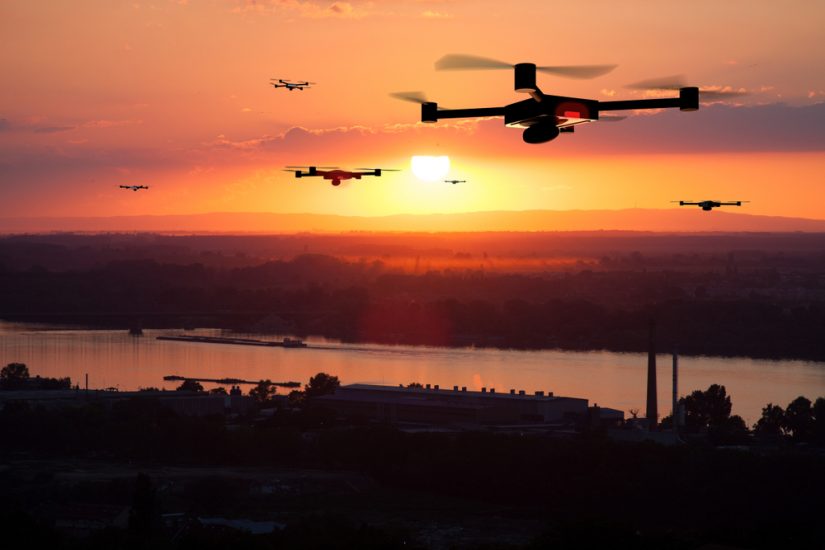 There are two key technologies which will need to be brought up to a commercial aviation grade of precision and reliability before scalable, beyond-visual-line-of-sight (BVLOS) drone operations in a shared airspace, supported by a UAS traffic management (UTM) system, can go ahead: a robust communications network and an automatic detect-and-avoid (DAA) system.

Both of them involve very complex engineering challenges. Mobile phone services offer good coverage in around populated areas but beyond towns and cities another communication medium will be required. Strategic detect and avoid algorithms can be built into the software which drives the flight information system, essentially deconflicting flight-plans. But how will the airborne, tactical DAA system work? In commercial aviation a traffic collision avoidance system (which is not an air traffic management tool but an aircraft protection system) requires 7kg of avionics plus a mountain of paperwork in standards and regulations to align, globally, TCAS procedures with autopilot systems. How will this work in the drone world?

There are a number of competing industry solutions of varying complexity and expense which all claim to offer a robust solution. Governments around the world are working to define which solutions and procedures offer the best way forward.

In the USA the Federal Aviation Administration (FAA) and its research partner NASA are working on both strategic and tactical DAA technologies. “The next UTM service is likely to be Strategic Deconfliction based on a standard that ASTM is working on,” said Jay Merkle, FAA UTM Integration Office Director, speaking at NASA’s Project Technical Interchange meeting on 23 February 2021.

In September 2020 NASA published a report on Strategic Deconfliction Performance, detailing the results and analysis arising from the agency’s UTM Technical Capability Level 4 demonstration carried out in 2019. Among issues addressed, the report examines how well unmanned operations responded to new constraints in the airspace, and how effectively they deconflict with pop-up priority operations. NASA tested the ability to perform strategic deconfliction, handle priority operations and establish constraints using the UTM system. Live, distributed flight tests were conducted across Technical Capability Levels (TCLs) that culminated with a set of complex tests performed as part of TCL4. This flight test involved two FAA-designated UAS test sites building teams to collaborate with NASA’s UTM project on the execution of several detailed, small UAS scenarios in urban environments.

Further work on understanding strategic DAA options is also continuing as part of the FAA’s BEYOND programme of BVLOS UTM research (https://www.unmannedairspace.info/uncategorized/faa-launches-beyond-research-programme-to-further-nas-uas-integration/).

In terms of tactical detect and avoid, flight Test Series 6 (FT6), at NASA Armstrong Flight Research Center in California helped establish the minimum operational performance standards for DAA systems for UAS. The system must alert the pilot in a timely manner when a conflict occurs and determine which display elements the pilot needed to be aware of. In November 2019 NASA’s Langley Research Center started using FLARM traffic awareness and collision avoidance technology in its Pathfinder drone UTM project. The goal of the Pathfinder programme was to take separate UTM projects and combine them into a single autonomous concept to enable vehicles to fly and communicate with other autonomous vehicles in the airspace. “Pathfinder was conceived as a way to perform a graduation exercise for a lot of the UTM projects we developed over the years,” said Lou Glaab, assistant branch head for the Aeronautic Systems Engineering Branch in Langley’s Engineering Directorate and Pathfinder project manager. Part of that graduation exercise is the Independent Configurable Architecture for Reliable Operations of Unmanned Systems (ICAROUS).

FLARM is being used as part of ICAROUS both to avoid manned aircraft as well as other drones.

“The Swedish validation will undertake fully autonomous intercity flights between the Linköping municipality and Norrköping Airport (two Swedish sites around 50 km apart). Real test flights will be merged with simulated traffic to demonstrate the capability of combined U-space services and on-drone Detect and Avoid (DAA), to safely de-conflict the route of autonomous eVTOL flights,” according to the project description.

In June 2020, the European Commission announced it will fund up to EUR21.1 million of the EUR27.4 total required for the EUDAAS (European Detect and Avoid (DAA) function based on new sensors and processing for RPAS integration into air-traffic management) programme. According to a project fact sheet:

“The EUDAAS project will develop and validate a 100% European detect and avoid (DAA) solution for safe insertion of large military Remotely-Piloted Air Systems (RPAS) in the European air traffic so that RPAS can operate along with other manned and unmanned aircraft. EUDAAS will also increase the maturity of non-cooperative sensors, to enable the use of RPAS in a much wider and flexible way than currently possible. The project addresses the current user needs by focusing on specific use cases such as the European medium altitude longer endurance RPAS.”

In October 2020 the UK Civil Aviation Authority published CAP1861A: Detect & Avoid for Non-Segregated BVLOS, as an annex to the previous document on the fundamentals of BVLOS (CAP1861).

According to the CAA Innovation Hub, the new CAP builds on the fundamentals of BVLOS laid out in CAP1861 to focus specifically on the functional requirements of a DAA solution. It introduces the ‘DAA Ecosystem’ in more detail and then goes on to present the DAA evidence framework. This framework was created for the CAA’s BVLOS sandbox projects in order to help understand and describe how a proposed DAA solution tackles the necessary requirements, and how the Innovator intends to conduct testing against each one. This can be used by anyone looking to understand what is expected from the development and testing of a DAA solution.

This document was produced as part of the CAA’s BVLOS programme and reflects the specific focus of the BVLOS sandbox on tackling the challenges of operating in non-segregated airspace using DAA. DAA is also being researched within the UK Future flight programme (https://www.unmannedairspace.info/latest-news-and-information/uk-test-site-in-snowdonia-begins-detect-and-avoid-tests-on-the-ground-ahead-of-airborne-installation/).

In August 2021 the CAA’s Innovation Hub launched a series of Technology Demonstrators to investigate key technologies to trial DAA solutions for BVLOS drone operations. It is expected that a complete DAA Solution is likely to include some combination of different technologies and sensors, according to a description of the programme. Industry and academia who are developing DAA technologies and solutions are invited to participate in any of the following Technology Demonstrators:

The Technology Demonstrators will explore the performance requirements of DAA technologies, investigate the applicability and sufficiency of various technical standards for UK airspace, and explore requirements for UK Technical Standard Orders (TSO) for DAA equipment.

The UK’s Research and Innovation (UKRI) has also part-funded a new Pathfinder project to develop safe DAA procedures. The consortium aims to demonstrate safe BVLOS drone flight alongside conventional air traffic in non-segregated airspace. This will be achieved by developing a comprehensive electronic surveillance picture based on Mode-S and Automatic Dependent Surveillance-Broadcast (ADS-B) transmissions using existing internationally recognised systems, procedures and rules, and integrating it into a UTM platform. This information will be re-broadcast via Traffic Information Service – Broadcast (TIS-B) to enhance the situational awareness of all airspace users. The project is expected to be completed by November 2021.

Meanwhile, in November 2020 Israel’s civil and military airspace management organizations announced they were working on developing new sense and avoid technologies to be fitted on all drones flying in the country’s airspace, to ensure safe separation of civil manned aircraft and drones from larger Israeli Air Force (IAF) UAS.

According to a TAS web-page article:

“In the air domain specifically, the largest impediment to the integration of unmanned aircraft (regardless of autonomy) into the National Airspace System (NAS) is complying with the intent[1] of the See and Avoid (SAA) requirements detailed within Regulations 163 and 163A of the Civil Aviation Regulations 1988 (Cth), particularly in Beyond Visual Line of Sight (BVLOS) operations. In lieu of a solution, operators and the regulator must go through a labour-intensive stakeholder engagement process with all aviation parties to prevent mid-air collisions. This approach will not scale to the projected numbers of Unmanned Aerial Systems (UAS) operations into the future.

“An autonomous/highly automated DAA system that complies with the safety objectives of CAR 163 and CAR 163A is a key enabling technology for integration into complex Australian airspace and will form an integral part of the safety assurance framework for UAS operations into the future.

“The TAS team have initiated a new project, led by Revolution Aerospace, to develop a new Detect and Avoid Design, Test and Evaluation (DT&E) standard for low-risk, uncontrolled airspace outside the airport environment. This is particularly relevant to Australian unmanned aircraft operations.”

Meanwhile in May 2021 Aquarius Innovation announced it was collaborating with the National Research Council of Canada (NRC) to integrate the NRC’s artificial intelligence-based detect and classify systems into Aquarius Innovation’s UTM system.

According to a company press release, Aquarius, a Canadian SME, is a member of Transport Canada-led RPAS Traffic Management Action Team (RTMAT), in which the NRC is also a participant.

Transport Canada has partnered with LOOKNorth and the NRC to test the performance of several ground-based and airborne DAA systems, with industry support from Drone Delivery Canada, Canadian UAVS and Pegasus Imagery. “Testing will be conducted in late 2020 and early 2021. The results of these trials will help us determine safe minimum performance requirements for these types of DAA systems,”  according to a Transport Canada website (https://tc.canada.ca/en/aviation/drone-safety/drone-innovation-collaboration-canada#toc1-3).