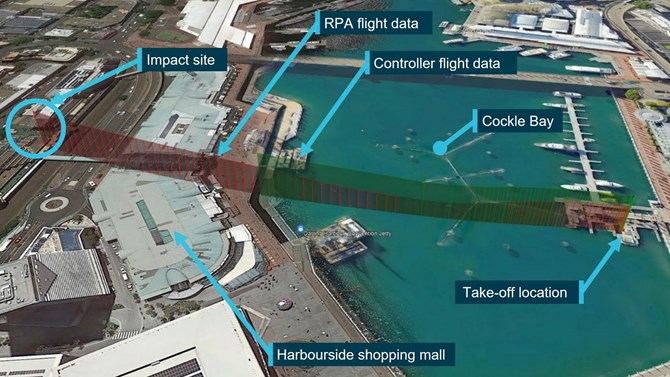 The Australian Transport Safety Bureau (ATSB) has announced the results of its inquiry into a January 2021 fly-away incident where a DJI Inspire 2 remotely piloted aircraft (RPA) collided with a hotel window, injuring an occupant.

“On 15 January 2021, the DJI Inspire 2 was being used for aerial photography and videography above Cockle Bay in Darling Harbour, Sydney,” said the report. “Shortly after take-off, the RPA unexpectedly accelerated away from the pilot, and became unresponsive to control inputs. It accelerated to its maximum speed and, a short time later, collided with the window of a hotel adjacent to Darling Harbour. The RPA shattered the window but did not penetrate it. A person inside the hotel received minor injuries from flying glass, and the RPA was destroyed.

The ATSB investigation into the incident found the compass of the RPA failed due to electromagnetic interference during flight, leading to the fly-away.

In the four years from 2017 to 2020, 94 occurrences of partial or complete loss of transmission and/or reception of digital information from an RPA were reported to the ATSB.

The majority of these occurrences resulted in damage to either the aircraft, property, or both.

“It’s important RPA pilots ensure they are familiar and well drilled in emergency procedures, as well as being proficient in flying in all flight modes,” Mr Macleod said.

Mr Macleod noted that during an RPA fly-away, there may only be a few seconds in which a pilot can take avoiding action.

“In the event of a compass failure, switching to the fully manual attitude flight mode may assist regaining control of the RPA,” he noted.

Following a review of the occurrence, the RPA’s manufacturer, DJI, updated the user manuals for a number of its products, including the Inspire 2.

The changes provide additional guidance to users regarding the use of the fully manual attitude flight mode in the event of compass interference.

Although not contributory to this occurrence, the ATSB investigation also found the pilot did not follow the operator’s emergency procedures, or comply with the regulator’s operational permissions to fly in restricted airspace.

“This is particularly true in populated areas, where risks are potentially elevated.”

Adhering to the limitations and guidance provided by the regulator will ensure these risks remain as low as reasonably practicable, Mr Macleod concluded.