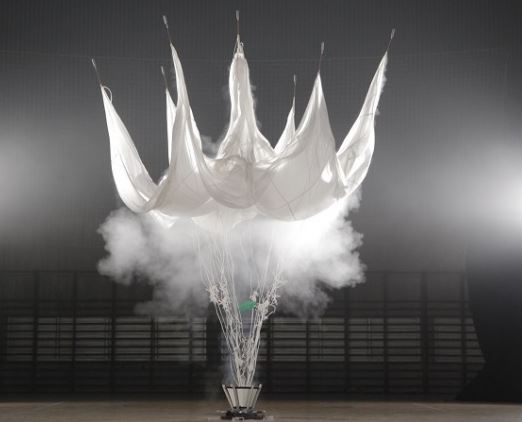 Standards authority ASTMS has announced the publication of a new standard for sUAS (small Unmanned Aerial Systems) parachutes. According to the agency: “This specification covers the design and manufacture requirements for deployable parachutes of small unmanned aircraft (sUA). This specification defines the design, fabrication, and test requirements of installable, deployable parachute recovery systems (PRS) that are designed to be integrated into a sUA to lessen the impact energy of the system should the sUA fail to sustain normal stable safe flight. Compliance with this specification is intended to support an applicant in obtaining permission from a civil aviation authority (CAA) to fly a sUA over people.

“This specification is applicable to the design, construction, and test of deployable parachute recovery systems that may be incorporated into the system or structure, or both, of sUA seeking civil aviation authority (CAA) approval in the form of technical standard orders (TSO), flight certificates, flight waivers, flight permits, or other like documentation.”

The publication has been welcomed by drone parachute manufacturer ParaZero Israel Ltd. “This is a significant step forward for the commercial drone industry” said the company in a statement. “The new ASTM standard, also known as F3322, defines the requirements for the design, manufacturing and testing of sUAS parachute systems. ParaZero was a member of the standard development working group along with the Federal Aviation Administration (FAA), MITRE and other prominent industry players.

“Among other things, the standard requires an autonomous triggering system to detect failures and deploy the parachute without relying on the RPIC (remote-pilot-in-command) as well as a flight termination system to stop the motors from spinning. To meet the standard, parachute systems will need to pass a series of aerial deployments (45 deployments for multi-rotors) through which they need to prove the effectiveness of the system in the sUAS’s full flight envelope and in various failure scenarios.”

According to Avi Lozowick, ParaZero’s Director of Policy and Strategy, “The standard is designed to allow Civil Aviation Authorities (CAA) to determine with confidence whether a parachute system is safe enough to allow for flight over people. A leading group of experts from around the world spent many months defining and perfecting the standard. We encourage the FAA and CAAs in other countries to adopt this standard.”