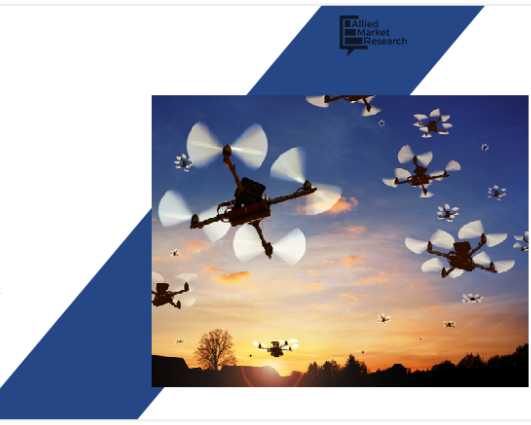 The promising growth rate of the drone market and public and private developments and investments in UTM is expected to drive the unmanned traffic management market during the forecast period. However, privacy and security concerns related to data and technological challenges in the implementation of UTM are anticipated to hamper the growth of the market. Moreover, increase demand for improved surveillance and improved government support are expected to offer lucrative opportunities for the market in the future. 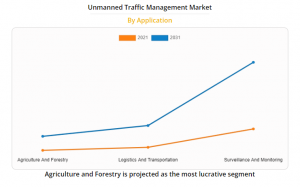 Public and private developments and investments in UTM

Increasing public and private companies’ investments in the development of unmanned traffic management systems are anticipated to drive the growth of the market during the forecast period. For instance, in March 2022, Terra Drone Corporation raised a B-series fund of $70 million (8 billion Japanese yen) to accelerate the development of an air traffic control system for unmanned aircraft known as Unmanned Traffic Management or UTM.

Moreover, the developments of unmanned traffic systems and collaborations of private and public market players to enhance the performance and efficiency of UTM are expected to fuel the growth of the unmanned traffic management market. For instance, in August 2020, PrecisionHawk, Inc. developed Automated Unmanned Air Traffic Control System, which is designed to enable collision avoidance between drones and manned aircraft.  In addition, in December 2020, Altitude Angle entered into collaboration with Inmarsat, the leader in global mobile satellite communications, and A-techSYN, a foremost manufacturer of next-generation Unmanned Aerial Vehicles (UAVs) to jointly develop Pop-Up UTM platform. Also, in June 2019, Terra Drone Corporation entered into collaboration with Unifly, a leading drone traffic management provider. Under this collaboration, Terra Drone Corporation successfully demonstrated an unmanned traffic management (UTM) system developed jointly with Unifly to the Taiwanese government officials.

Thus, increasing developments and investments in UTM by private and public industry players are expected to propel the growth of the unmanned traffic management industry over the forecast period.

According to the National Aeronautical and Space Administration (NASA), unmanned traffic management (UTM) is a bit different than the air traffic control system used by the Federal Aviation Administration (FAA) for commercial airplanes. UTM is based on the digital sharing of each user’s planned flight details. Each user will have the same situational awareness of the airspace, unlike what happens in air traffic control. In addition, UTM systems share real-time information with unmanned aerial vehicles or drone pilots for operating safely and managing operations according to information. Such information is transferred through a distributed network of highly automated systems via application programming interfaces (API), excluding voice communication. Due to this, there is a chance of cyber threats or data hacking for misleading drone operators through UTM systems. This factor is anticipated to hamper the growth of the market.

Moreover, hackers may be able to exploit drones if they acquire access to the drones’ unencrypted Wi-Fi and GPS systems. This also negatively impacts the unmanned aerial vehicles market and simultaneously hinders the growth of the unmanned traffic management system market.

The growth in threat from terrorism and increase in security concerns worldwide have led to increasing expenditure on drones or unmanned aerial vehicles, which in turn is boosting the use of drones in industrial surveillance and is expected to create demand for unmanned traffic management systems to perform drone operations in a safer manner. Drones can carry out stealth operations, function at night, operate at any location, and are easy to deploy. Such benefits have led to an increasing number of drones in the law of enforcement and industrial surveillance operations. For instance, in March 2021, Elbit Systems Ltd. signed a $300 million contract to supply Hermes 900 unmanned aircraft systems to 12 countries in Asia. Such drone operations to improve surveillance creates the need for the deployment of unmanned traffic management systems to help drone pilots identify and allocate specific operations to drones. For instance, in February 2020, Unifly NV signed an agreement with NAV CANADA for the deployment of a national system that provides digital services for safely operating and managing drones in Canadian airspace. The system has an intuitive user interface and will enable Canadian drone pilots to access the web and mobile applications to identify safe and legal airspace, plan flights, and manage operations, pilots, and a fleet of drones. Thus, an increase in demand for improved surveillance is expected to create demand for drones and consequently propel the growth of the unmanned traffic management market.

Moreover, the security of key institutions has been greatly enhanced with advanced video surveillance and access control systems. Drones are used for surveillance of major events or gatherings in large cities. Also, several government agencies impose strict policies and guidelines for the installation of drones at high-risk locations. For instance, in April 2022, OneSky entered into a partnership with Garuda Robotics (GR) to provide Uncrewed Aircraft Traffic Management (UTM) services to aviation authorities, city governments, enterprises, and security agencies in Malaysia. Such factors are expected to create the need for unmanned traffic management systems in security agencies or surveillance systems in urban areas, which are expected to fuel the growth of the market during the forecast period.