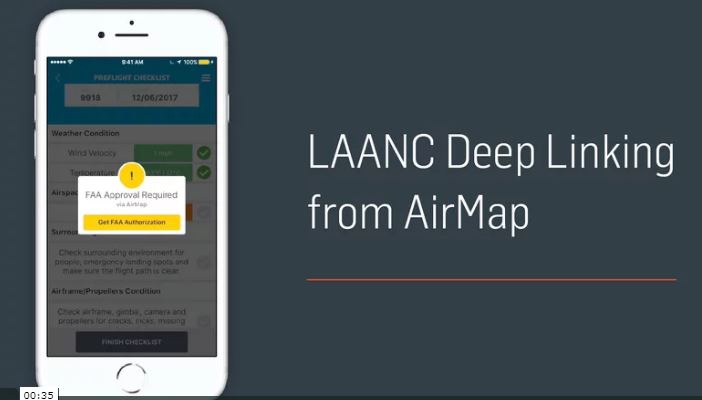 According to the company “With LAANC Deep Linking, drone operators with an AirMap account can transfer flight plan information from any integrated app to the AirMap app. In AirMap, operators submit an authorization request before being automatically redirected back to the originating app to complete their flight plan. Authorization approvals are delivered via text message and are accessible from the AirMap app. Integration is easy and takes less than 24 hours.”

In October 2017 AirMap launched its digital airspace authorization in U.S. controlled airspace, available to anyone with AirMap’s iOS and Android apps. Part of the AirMap developer platform, the new deep linking feature helps flight planning service providers such as 3DR, Betterview, Converge, and DroneDeploy provide drone operators with access to low-level, controlled airspace. Digital authorization is making its way to DroneBase and Measure in February, says AirMap. Beginning in April, the LAANC prototype will expand into a national beta. By the end of the year, more than 500 towered airports across the United States will begin offering LAANC authorization.