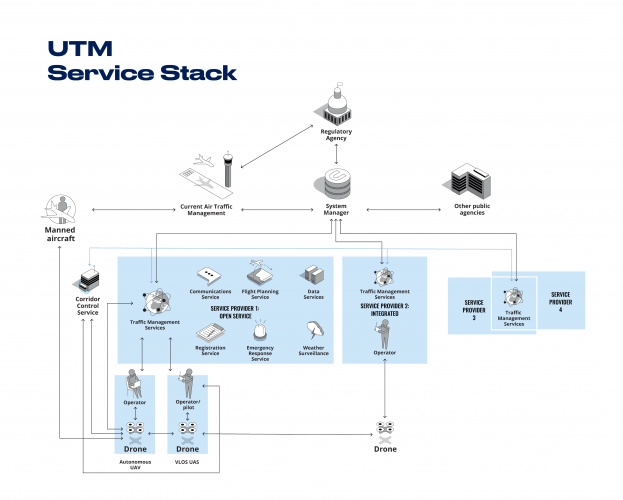 An Airbus UTM report points to weaknesses in the architectural framework under development to support Unmanned Aircraft System (UAS) Traffic Management (UTM). Entitled Evaluating Fairness in UTM Architecture and Operations, the report warns of “severe consequences for the ultimate goal of providing access to our airspace and enabling a wide variety of future missions”. It says there is “a clear need to study and evaluate the implications of the UTM architecture on fairness, even at this relatively early point where complex implementations don’t yet exist.”

The report is a call to action to take advantage of “a unique opportunity to refine UTM architectures to ensure that our system designs, implementations, and operating rules remain fair for all users, rather than benefitting first-movers and the largest operator or UTM Services Suppliers (USSs).”

It highlights risks arising when industry participants, even those who appear outwardly collaborative, seek to gain an advantage, in some case unfairly. Ultimately, “fair airspace access” needs to be enacted through policies and requirements on services such as demand management and deconfliction, and through rules set for negotiating a resolution to a conflict between aircraft.

The report recommends that industry and academia conduct a series of studies to better quantity the effects of unfair operations. It says the goal should be a path forward that keeps the UTM ecosystem competitive and open to innovation, while ensuring fair airspace access for urban air mobility (UAM) and conventional aviation. It also calls for a series of metrics related to fair and unfair operations to inform policy decisions.

Fairness as a guiding principle

Airbus UTM is an active player in UAS and UAM design and development and has conceived a potential UTM architecture. This identifies nine guiding principles intended to ensure that overall system design considerations around safety, security, reliability and interoperability (among others) are not compromised by a desire to deploy UTM systems as quickly or inexpensively as possible.

The report finds the “current UTM environment lacks a clear and agreed upon set of mechanisms, protocols, or services for resolving competition or conflicts for resources, such as airspace, vertiports, or air traffic services. This has not been an operational problem yet, because the number of operations has not warranted it. But the inability to resolve conflicting requests for resources will soon be an impediment to integration of new entrants. Of particular concern is establishing a UTM environment in which flight operations and other stakeholders view their access to airspace and related resources as fair.”

To support specific policies and regulations, responsibility for a fair UTM ecosystem lies with regulators and competent authorities. The report says incentives must be established for fair behaviour and recommends fairness issues be addressed proactively, not reactively.

The report looks in detail at use cases in which fairness issues will arise. It considers access issues for all users as well as constraints such as noise, environment, security and privacy. Four use cases are examined.

To establish optimum solutions, Airbus UTM carried out a broad survey of potential options and examined pros and cons associated with each concept. Among these, the report considered exclusive allocation of airspace blocks, for example through an auction, or through certification of proprietary systems. It also looked at strategic conflict resolution and the need for rules governing this process. This relates to many different mechanisms including strategic conflict resolution, peer-to-peer negotiation, tactical deconfliction or detect-and-avoid. The report calls for clarity over rules which resolve conflicts strategically as well as tactically, and how they would be applied, especially in multi-vehicle or successive conflicts.

Other use cases examined include prioritising rules to allocate resources or incentivise desired policy and allocating resources to specific flights.

The report also analyses current air traffic management mechanisms used to allocate resources and determine the ATM hierarchy. With reference to concepts such as first-come, first served (FCFS) Time-Based Flow Management (TBFM) and Enhanced Tactical Flow Management (ETFM), Airbus UTM says: “This type of demand management has particular applicability to UTM, but would need to be adapted if a more federated architecture is adopted for UTM, with service providers self-separating their vehicles from other vehicles.”

The report proposes a six-step evaluation process to determine fairness within a UTM setting and in UTM standards development. These can be used to establish fairness across a range of use cases ranging from interoperability and compatibility policy to in-flight tactical decisions. Top level criteria are as follows:

Finally, Airbus UTM recommends collection and saving of operational metrics, especially those around delays and route adjustments in areas with more than one operator or USS. Building up this real-world data now will be invaluable both in understanding the right kinds of metrics to collect long-term and in validating proposed solutions in simulation.