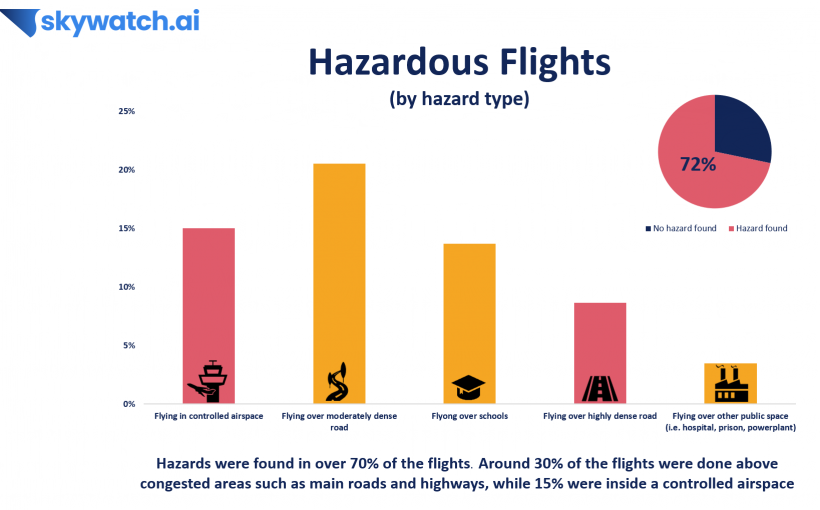 Over 70% of commercial US drone flights involve some kind of hazard, according to research from drone insurance company SkyWatch (https://www.skywatch.ai/blog/skywatch-ai-flight-data-insights). The company has analysed over 50,000 flight logs generated during 2018 to research where the areas of risk may be, which US States were hosting most drone operations and what the impact the Low Altitude Authorization and Notification Capability (LAANC) has had on increasing commercial drone operations.

“Flying in a controlled airspace is quite frequent and will be mostly solved by the introduction of LAANC,” said the company. “Moreover, we noticed that around 30% of the flights were done above congested areas such as main roads and highways. While flying over hazardous areas usually does not increase the chance for an accident, it does significantly increase the severity of an incident if it does occur.  However, it doesn’t necessarily mean pilots should avoid such flights at all costs. It simply means you must prepare yourself in advance and try to mitigate such risks as much as you can.”

While California, Texas and Florida heading the list of states in terms of drone activity New York was down on the list. “We believe that this is because of the highly congested airspaces, which severely limit flight zones across the state. With this data in mind, we decided to take a closer look, and normalize the number of drones per state by comparing it with each state’s size (in square Miles). This exercise gave us surprising results – Suddenly, “Non-trivial” states are heading the list, like Connecticut and Massachusetts, where the number of drones per square mile is almost double that of California. Additionally, the adoption differences between states are relatively small. Practically we are seeing an almost even distribution of commercial drones between different states, except for specific states such as New York where stricter airspace regulation is acting as a barrier. We expect that as airspace regulation eases, we’ll see an even wider adoption.”

“What we found was that out of tens of thousands of logged commercial flights, 15% flew in controlled airspaces. Out of those, 75% flew in areas where LAANC is, or will be applicable, by the end of 2018.”