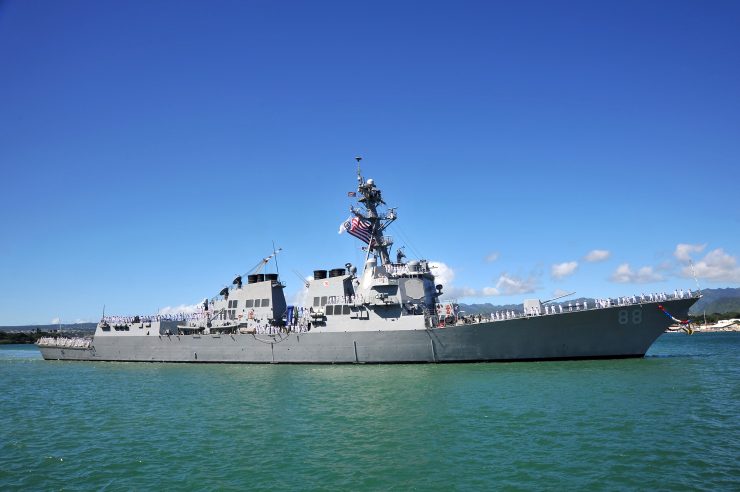 The Pearl Harbor-based USS Preble will be the first US destroyer to be equipped with the Lockheed Martin high-energy laser to counter surface craft and unmanned aerial systems, say numerous press reports.

The Preble will be outfitted in 2021 with the High Energy Laser and Integrated Optical-dazzler With Surveillance system, or HELIOS ( https://www.unmannedairspace.info/counter-uas-systems-and-policies/us-navy-awards-lockheed-martin-usd150-million-contract-anti-drone-systems/).

This will be the first HELIOS deployment, with the all the US Navy’s destroyers to be equipped with the weapon system over the following years. The US Navy awarded Lockheed Martin a USD150 million contract in March 2018, with options worth up to USD942.8 million, for the development, manufacture and delivery of two high power laser weapon systems, including intelligence, surveillance and reconnaissance (ISR) and counter-Unmanned Aerial System (counter-UAS) capabilities,

“The HELIOS program is the first of its kind, and brings together laser weapon, long-range ISR and counter-UAS capabilities, dramatically increasing the situational awareness and layered defense options available to the U.S. Navy,” said Michele Evans, vice president and general manager of Integrated Warfare Systems and Sensors. “This is a true system of capabilities, and we’re honored the Navy trusted Lockheed Martin to be a part of fielding these robust systems to the fleet.”

HELIOS combines three key capabilities, brought together for the first time in one weapon system: