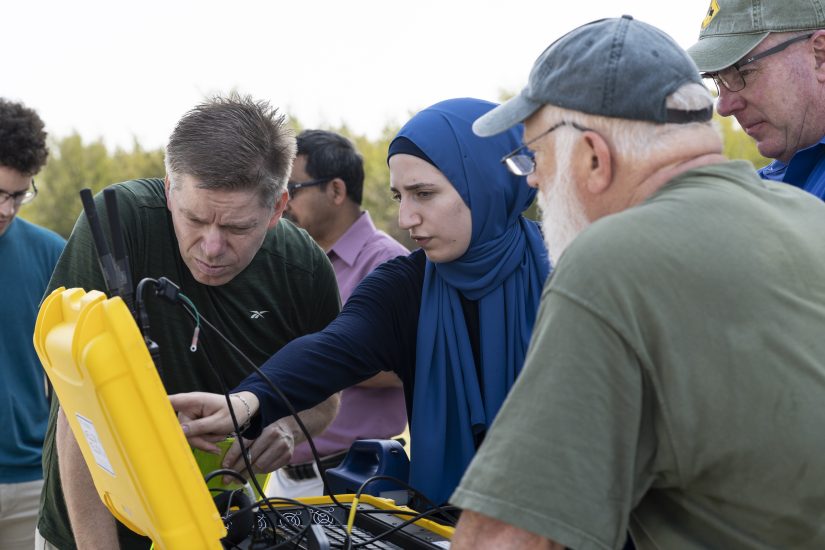 For the high demand routes to work, eVTOLs would need to be in constant contact with a traffic management system, as the test vehicle was during the test. This is not only to organize air traffic, but also to ensure the safety and security of the vehicles and people and property below.  The North Texas Cohort research team, a group of 15 entities, including representatives from UNT, Bell Trexton, Unmanned Experts, AAMTEX, worked with NASA, Hillwood and the Federal Aviation Administration (FAA) as they monitored the next generation aircraft through two ‘laps’ of a test route from AllianceTexas in Fort Worth to UNT’s Discovery Park in Denton, trialling novel communication and safety technologies.

“The test moves the North Texas region one step closer to a future where air taxis, air ambulances and delivery vehicles are a normal part of life,” said UNT College of Engineering professor Kamesh Namuduri, one of the leaders of the project. “We wouldn’t have been successful without all of our partners working in conjunction to make this a reality. We look forward to moving transportation in North Texas forward with the continued support of the entire team.”

The Bell 407GXi helicopter, supplied by Bell Textron as a surrogate eVTOL for the demonstration, completed the flight along a NASA-derived high demand route while providing real air data to a traffic management system known as a PSU, monitored on the ground. Leveraging Hillwod’s Alliance Texas Flight Test Center (FTC) – also known as ‘The MIZ’ for Mobility Innovation Zone – adjacent to the Texas Motor Speedway, the test was able to build upon earlier Unmanned Air Vehicle (UAV) and AAM efforts conducted over the past several years. The FTC has emerged as the ‘go to’ UAV and autonomous system industry destination for the collaborative testing and advancement of next generation technologies, including successful efforts for Bell, Wing, and other ground and air robotics companies.

“Hillwood is proud that the AllianceTexas Mobility Innovation Zone is serving as the catalyst platform for the future of Unmanned Aerial Vehicles and their related traffic systems,” said Christopher Ash, senior vice president of Aviation Business Development for Hillwood and Alliance Aviation Services. “North Texas continues to be on the leading edge of the future of flight and this partnership, organized by NASA’s AAM National Campaign and initiated by the University of North Texas and Unmanned Experts, Inc., showcases the depth of regional assets and corporate resources that have enabled the MIZ to become a global focal point in the technological revolution occurring within air mobility.”

UNT’s portion of the research is part of UNT’s Center for Integrated Intelligent Mobility Systems (CIIMS). CIIMS was established in 2020 to bring together expertise across disciplines, including engineering and business, around intelligent mobility, which includes autonomous flight, ground vehicles, and the systems that will enable their deployment.