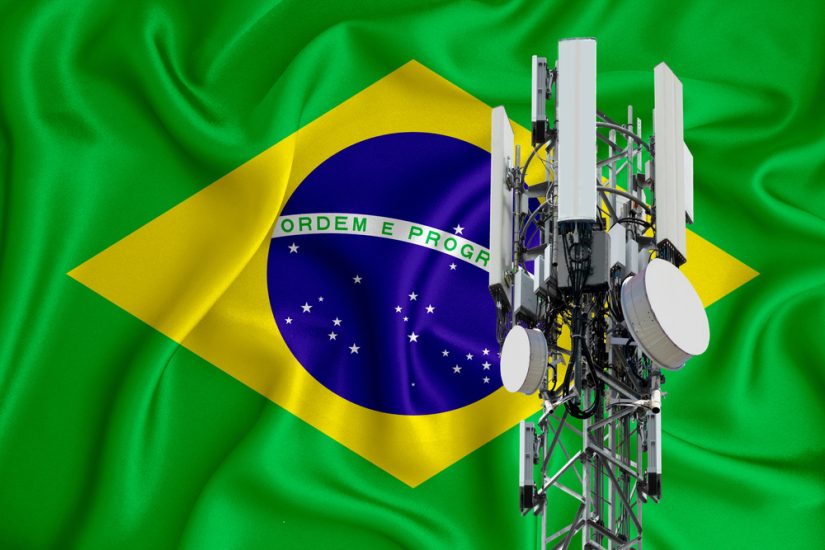 Most drones in Brazil currently use unlicensed ISM, restricted radiation, Wi-Fi type links in the 2.4 and 5.8 GHz bands, for both C2/CNPC and payloads, with a variety of comms modules/solutions homologated by ANATEL via their MOSAICO System, and accredited certification organisms, OCDs. This allows for both VLOS and BVLOS, the latter under proper ANAC Design Authorization, within ranges of a few kilometers, 3 to 6, on average.

ANATEL has also proposed provisions for homologation of Terminal Access Stations Type II, to be used by drones that interface to the public mobile networks. In this context, a technical and cultural historical gap is yet to be overcome between the telecommunications and the aviation communities, particularly as it refers to risk and safety analysis, means of compliance, testing and verification, QoS, and KPIs, in design authorization and type certification scenarios. Ongoing work and standards produced by ASTM, RTCA, GSMA, GUTMA, Drone Interest Group, Aerial Connectivity Joint Activity, EUROCAE and 3GPP, are important references herein.

Without necessarily going into the technical challenges to provide interference-controlled, QoS-grade connectivity service to drones up to 400 ft AGL off the usually terrestrially oriented mobile networks, and base stations, one can conveniently start today from the 2017 study “An Overview of 3GPP Release-15 Study on Enhanced LTE Support for Connected Drones”, whose main results were summarized in “Enhanced LTE for Connected Drones”, issued in 2018. 3GPP TR 36.777 is also relevant.

Based on those initial studies and their ramifications, telco vendors Ericsson, Huawei and Nokia, and mobile network operators Vivo, TIM, Claro, and others, who are present and very active in the Brazilian marketplace, were able to deploy and offer Rel-15-based LTE connectivity services to local drone operators. Typical channel traffic, bandwidth, and reliability characteristics for C2, are 60/100 Kbps in UL/DL, 50 ms eNB-UAV latency, and packet error rate less than 10-3; for video streaming, UL at 50 Mbps. Meanwhile, telco vendors and operators alike are working on implementing and rolling out their Rel-16 and Rel-17 service offerings, with a view to also supporting UTM, Remote ID, Tracking and Location, Detect and Avoid, and other UAS Supporting Services, based on ‘GSMA LTE UNI Profile V1.0’, published in 2021.

On the hardware side, most major drone communications suppliers, in SoC, SIM card, pen-drive, and dongle form factors, already have their products homologated by ANATEL, including companies like Qualcomm, Telit, Quectel, Sequans, Fibocom and Elsight.

Local drone manufacturers like Speedbird Aero and XMobots have started using 4G LTE services to connect their drones to the RPS, yet in limited scenarios. In 2021, Parrot launched its 4G-native Anafi Ai drone, with a Fibocom L860-GL LTE interface, fallback to Wi-Fi, Cat 16 support to Gigabit LTE, 4×4 DL MIMO, support for carrier aggregation and 256 QAM modulation. Planning, engineering, testing and verification in such contexts shall require more specialized knowledge, tools, and methodologies.

In the last couple of years, Brazilian MNOs Vivo, TIM and Claro have been spearheading various initiatives to promote the use of 4G LTE in 700 MHz by drone operators, farmers, and their partners, in extensive agricultural areas. Crop-dusting and the associated a priori and a posteriori aerial surveys, are the most thought after applications. ConectarAgro is a not-for-profit association of technology and telecommunications companies, and entities in the agricultural supply chains, whose charter is to promote and facilitate the use of connectivity alternatives to the benefit of the sector, including, but not limited to, 4G LTE in 700 MHz and satellite. Developing innovative business and financing models to make telco capex investment in rural areas viable, is also part of their current activities. Current LTE Advanced Pro terrestrial coverage reaches 94.3% of the country’s municipalities.

5G spectrum auctions have taken place in November 2021, offering blocks of 700 MHz, 2.3, 3.5 and 26 GHz, which were granted to around 10 MNOs. As of today, most major capital cities in Brazil are provided with 5G services. As to the prospects for 5G adoption by the local drone industry, two main challenges must be faced. It is yet to be demonstrated and cost-justitied that drone communications – both critical C2/CNPC and non-critical, payloads – require and can benefit from URLLC, ultra-reliable, low latency communications, with Gbps speeds and latencies in the order of milliseconds.

It is also unclear at which speed, with which priorities, and at which prices, the local MNOs will deploy the desired UE vertical services, with the appropriate technical and QoS characteristics, in regions where coverage is mostly needed, namely, rural, agricultural, remote areas.

These developments are expected to occur over the next three to five years, as stated recently locally by a GSMA official at a telecommunications conference. One should also keep in mind that telcos are used to talk tens of millions of subscribers, particularly as new, heavy investments are to be made, whilst the drone industry in Brazil, and the potential number of users of cellular-connected drones is currently measured in the thousands, in a total base of 100 thousand drones, 50% of which are commercial.

A good example of industry initiative is provided by XMobots, a leading local drone manufacturing and operating company, in their pursuit of more challenging operational envelopes in urban areas, using cellular LTE connections to support the C2 link in NRLOS (Non-Radio Line of Sight) mode. In the context of an experimental exemption granted by ANAC, their goals are to study and measure the behavior of the C2 link under both natural and illicit interferences, and to degradation of QoS parameters, logging a suitable number of flight hours, and measuring failure rates and metrics associated with the QoS parameters of the virtual MNO connection. At both Air Data Terminal (ADT) and Ground Data Terminal (GDT) ends, two omnidirectional antennas are used, to provide diversity, and a Wi-Fi link is set up as a backup link. Main variables in the experiment are send/receive packet delay, signal intensity, and noise levels RSSI/SNR. The end goal is to gather data about the system’s reliability, based on failure rates, and the functioning of the system’s safety routines in emergency conditions. These should provide a basis for discussions with ANAC on minimum levels of performance of the C2 link in urban areas.

The company is also planning to extend the experiment to 5G networks, aiming at using the applicable services for UTM/CNPC, with focus on high data rates, low latencies, 3D service coverage, and resiliency to cybersecurity, amongst other.

The role of mobile 4G/5G services within BR-UTM

The BR-UTM (Brazilian UAS Traffic Management) tests will be carried out in phases of increasing complexity, based on the services and facilities made available.

Phase 1 of BR-UTM tests will occur at the first test site established in Brazil for this purpose and will try out eight initial services. As there is no guarantee of mobile connectivity inside the test site area, the airspace management will be carried out in a static way, applying the first layer of conflict management (strategic deconflict). Thus, once the volume or trajectory requested by the operator during the flight planning is authorized, it will be made unavailable for other airspace users, taking into consideration the entire period between the proposed departure and arrival. However, this approach will not allow the scalability of operations, preventing this very promising segment from being fully exploited.

In that regard, a new step towards the second layer of the conflict management (separation provision) needs to be taken. For that, all operators intending to use the UTM environment must be capable of sharing a set of information, in near real time fashion, with other stakeholders inside the ecosystem. In this sense, the mobile connectivity inside the UTM world will play an important role in moving forward toward scalability of unmanned operations. Thus, the tests related to further phases of BR-UTM will require a certain level of mobile connectivity between the operators and the UTM ecosystem, demanding a more robust structure compared to the one in Phase 1. This information will allow the management of conflicts, initially made in a static manner, to be carried out in a more dynamic and efficient way. The aircraft position can be used as an example of information to be made available by the operator, in near real time, allowing UTM participants to be aware of surrounding operations, which could affect their volume or their intended trajectory.

To allow for such information sharing into BR-UTM, three levels of  connectivity were envisaged, which will rely on the available infrastructure:

The first level of connectivity, CS Network, will be tested in the second phase of BR-UTM, scheduled to take place in 3Q2024, and will provide more effective airspace management compared to the previous phase. Phase three, scheduled to start in 1Q2025, will take place in an airspace without mobile connectivity and will be based on the broadcasting capability (Broadcast UAS) of the aircraft, allowing the use of the Approach and Take-Off Zones (ATOZ) of aerodromes, in uncontrolled airspace. Phase 4, scheduled for 2Q2025, will comprise the connectivity levels of Phase 2 (CS Network) and Phase 3 (Broadcast UAS) and will take place in uncontrolled airspace, including the ATOZ as well.

Phase 5 will start in 3Q2025 and will use, in addition to the CS Network and the Broadcast UAS, the Networked UAS connectivity level, which will be dependent on a mobile infrastructure, 4G/ 5G or other available technologies.

Once those connectivity levels are implemented, the conflict management will be made in a dynamic way, allowing the situational awareness enhancement of all operators inside the UTM ecosystem. This approach will be a huge step towards the UAS scalability.

Due to its vast and diverse territory, extensive mobile wireless network geographical coverage, and many still unexplored drone use cases and applications, Brazil represents a huge market opportunity for drone services, manufacturers, operators, support service providers, and investors alike. A robust and responsive regulatory ecosystem is in place, which has guaranteed safe drone operations in low altitude airspace from the beginning, at the same time it keeps pace with technological advances in the industry. The advent of BR-UTM will represent another major milestone in the evolution of Brazil’s overall Air Traffic Management ecosystem.