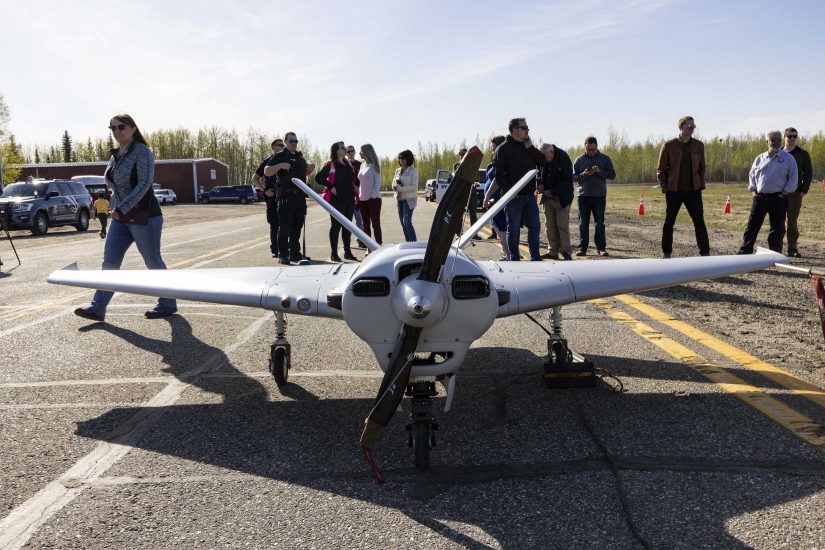 An unmanned aircraft owned and operated by the University of Alaska Fairbanks flew from the general aviation area of Fairbanks International Airport on Sunday, a historic feat in the effort to safely incorporate such aircraft into controlled airspace.

The flight was the first civilian large drone operation from an international airport in Alaska.

Taking off from the airport’s general aviation runway, the Sentry aircraft flew in a designated flight pattern used for departures, arrivals and runway approach practice. It was controlled remotely by UAF Alaska Center for Unmanned Aircraft Systems Integration personnel inside the ground control station near the far end of the airport’s East Ramp.

The light-gray Sentry, with a wingspan of nearly 13 feet and weighing 280 pounds when empty, landed safely and came to its intended stop at a taxiway.

“This historic flight for Alaska is the result of the dedication of the ACUASI team and our great partners at Fairbanks International Airport, the state of Alaska’s Department of Transportation and Public Facilities and the Federal Aviation Administration,” ACUASI Director Cathy Cahill said. “This flight is an important first step in developing a drone economy in Alaska and improved freight and mail transport to rural Alaskans.”

Strong support from the University of Alaska, the Alaska Legislature, Gov. Mike Dunleavy and Alaska’s congressional delegation made the achievement possible, Cahill said. She also said the Federal Aviation Administration’s Beyond program was key to obtaining the permissions needed to fly this, and future, large drone missions for cargo delivery and other essential Alaska missions.

“Drones have such potential in environments like Alaska. They have huge economic potential for our businesses and industries,” Dunleavy said. “But perhaps more importantly they have the potential to help Alaskans when we need it the most, during disasters and emergencies such as surveilling a wildfire or dropping emergency supplies during a search and rescue.”

The Sentry was treated like any other aircraft — and that’s the idea behind integrating unmanned aircraft into the airspace.

The Sentry, like other aircraft operating in the controlled airspace, carries a transponder that allows air traffic controllers to know its location and altitude.

Sunday’s flight was the culmination of years of preparation and coordination with airport and FAA staff.

“Alaska is leading the way in drone research with a level of professionalism that our entire aviation community is known for,” said Commissioner Ryan Anderson of the Alaska Department of Transportation and Public Facilities. “This is a professional pilot safely operating an aircraft in controlled airspace at an international airport.”

The University of Alaska Fairbanks, through ACUASI, is one of seven FAA-approved test sites in the nation and the only one in Alaska.