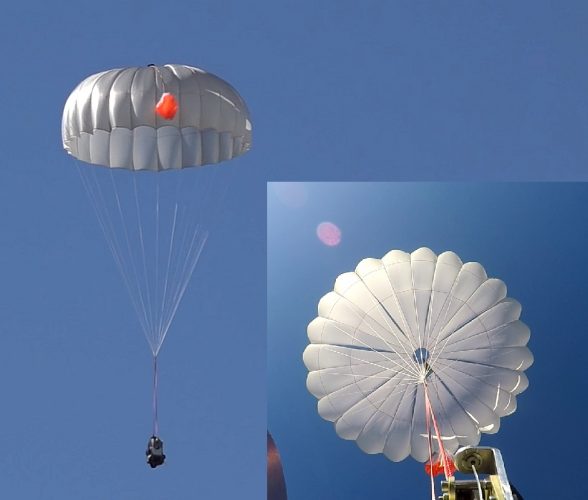 Drone service supplier UAVOS reports successful testing of its new two-stage parachute system. The new parachute system design is aimed to provide slow descent of the Unmanned Aerial Systems (UAS) at high speed. It includes two parachutes – the pilot chute and the main chute used to slow and stabilize the UAS. The decrease in the load speed on the UAS occurs due to the main chute opening delay function, when the pilot chute opens first. The parachute system is designed for UAS with speeds of up to 280 mph (450 kph) and weight of up to 110 lb (50 kg).

The pilot chute allows safe slow descent of the UAV during the main parachute deployment, as well as to open up the main chute at a minimum altitude.

“In the aircraft safety developments, saving an entire aircraft through a deployable parachute system is a crucial thing,” said Aliaksei Stratsilatau, CEO and Lead Developer of UAVOS. “These trials have generated an amount of data which allows us to quantify the performance of parachute system for future missions. Computer modelling cannot capture all the complexities. Parachutes encounter turbulent and dynamic airflow, which is almost impossible to replicate with computers. The only way to get a handle on all the possibilities is test.”