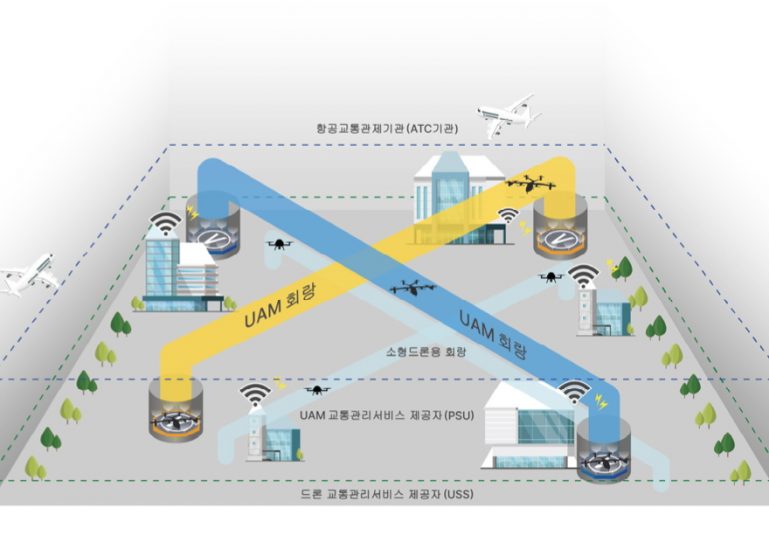 That vision is outlined in K-UAM Concept of Operations 1.0, released last month by South Korea’s Ministry of Land, Infrastructure and Transport (MOLIT). The document serves as a starting point for discussions on how to commercialize urban air taxis in South Korea by 2025, with the goal of realizing fully autonomous UAM operations by 2035, says evtol news.

The plan was created by UAM Team Korea, a public-private consultative body formed in June 2020 to develop a roadmap for adoption of UAM in Korea. The group comprises 37 stakeholder groups representing both the public and private sector and is chaired by Hwang Seong-gyu, the country’s Second Vice Minister of Land, Infrastructure and Transport.

Under the plan, commercial UAM operations in Korea will begin at altitudes between 300 and 600 meters (985 to 1,965 feet) in a limited number of defined corridors, created to separate UAM vehicles from other types of air traffic. Within a corridor, deconfliction will be coordinated by private UAM traffic management service providers, rather than traditional air traffic control.

The corridors will be designed to satisfy public requirements with respect to noise and safety while striving to minimize impact to other airspace users, including smaller unmanned aircraft systems. Other users who wish to navigate or pass through a UAM corridor will be required to satisfy the corridor’s operational performance requirements.

According to evtol news, the scheme is similar to the one described in the US Federal Aviation Administration’s (FAA’s) first UAM Concept of Operations (ConOps), released last year. However, in a recent AUVSI webinar, Steve Bradford, the FAA’s chief scientist for architecture and NextGen development, said that the agency is working on a ConOps 2.0 that will have fewer UAM corridors overall, reduced participation requirements for crossing UAM corridors, and more interaction between UAM and non-UAM aircraft outside corridors.

While it is unknown whether those strategies will eventually migrate to South Korea, the K-UAM Concept of Operations 1.0 does assume that fixed corridor networks will eventually give way to “dynamic corridor networks,” defined by the optimal path for each UAM service call. This would coincide with development of advanced digital platforms for air traffic management, replacing the voice-based communication between pilots and human controllers that will be required at UAM’s outset.