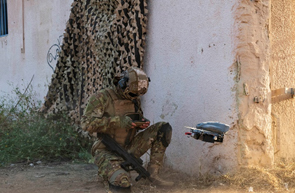 An article published by The Jerusalem Post highlights the role played by sophisticated drone systems in war environments. The report focuses on the Lanius drone manufactured by Elbit Systems, a new product that combines a number of technologies “that put it at the forefront of how drones are transforming war”. Lanius is part of Elbit’s Legion-X robotic and autonomous combat solution, designed for short-range operation in the urban environment. It can fly around small corridors and through doorways and can carry lethal or non-lethal payloads, capable of performing a broad spectrum of mission profiles for special forces, military, law enforcement, and homeland security.

“The small drone has an interesting appearance which differentiates it from the other types of small quadcopter-style drones. It uses small rotors and a large bug-like head full of optics, presumably helping it “see” better and aiding it in missions that involve mapping indoors. The Lanius has both surveillance and “attack” capabilities, another added function that modern drones need.

“Initially, these kinds of drones were called by other names, such as “loitering munitions” and their main point was that they had a warhead built in. This made them expendable so they either had to be used on high-profile targets, like radars, or they had to be cheap and expendable. Combining the various functions into one lightweight drone, like Lanius, appears to be a game-changer in terms of giving soldiers the tools they need on a modern battlefield.

“Elbit’s website says the new drone is “equipped to engage with target (man-in-the-loop),” meaning a person signs off on the drone’s operations. The site also says the drone is very maneuverable, offers “low collateral damage” and is high-speed. It has an onboard computer that supports “AI advanced algorithm for collision avoidance/mapping/ classification.” A video introducing the drone shows it being used in an urban environment: When soldiers get bogged down in a firefight, the Lanius is sent in to help. The video shows a kind of drone “mother ship” that can dispatch several Lanius. The drones then buzz around, like a swarm of bees, and identify enemy targets and help the soldiers who got bogged down defeat the enemy.

“Drones have become more popular for the same reason as tanks, planes and other systems. The drone as a platform lets an army do lots of missions and protects troops in the process. If an unmanned vehicle can seek out explosive devices, then soldiers won’t step on mines; if a drone can investigate a suspicious object, then people don’t need to be put in harm’s way.

“At the same time, there is concern that drones enable militaries to engage in operations remotely. That could be a good thing because it means fewer soldiers interacting with civilians or getting into fire-fights in urban environments. Critics see a different problem, involving “robots” potentially identifying targets and users neutralizing the targets with the push of a button, turning war into something that looks more like a video game.,” according to the report. 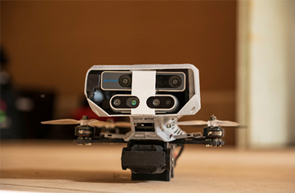