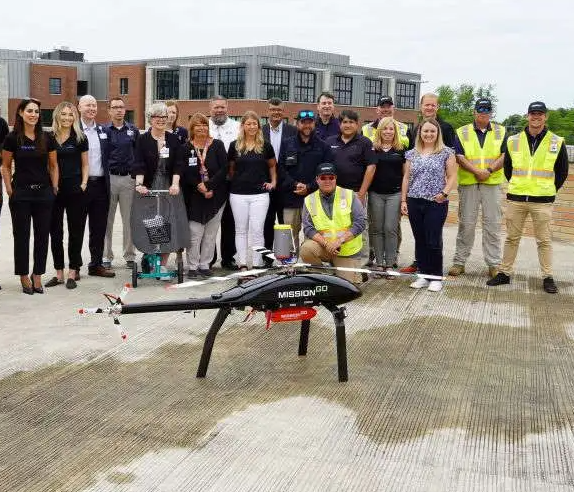 According to the joint press release, flight operations occurred in two separate locations. The first was at Taylor Medical Center, simulating UAS synergies at a hospital center. The second across a one-mile stretch of railroad tracks between Beaumont Wellness Center and the Big Rock Parking Deck. The second location showcased real-world viable UAS transport through multiple deliveries each day of operations and also was used to compare several agents against ground transport such as time, carbon emissions, damage to contents, etc. Once compiled and finalized, the results of this study will be released at a later date.

In compliance with the Federal Aviation Administration (FAA) regulations, flights were not conducted over non-crew members and the aircraft was kept within visual line of sight (VLOS) at all times. The UAV used during these operations was the MGV100 – a sub-55 pound all electric single rotor helicopter going through Type, Production, and Part 135 Certification with the FAA. At the completion of these certifications, the MGV100 aircraft will be cleared by the FAA to operate over populated areas and eventually eligible for flying beyond visual line of sight.

Teamwork is critical to the success of the uncrewed industry and necessary to continue moving forward. This operation brought together pilots, community leaders, healthcare professionals, delivery teams, legislators, and geospatial solutions and success is celebrated by all. MissionGO looks forward to partnering on future real-world operations and showcasing the capabilities of uncrewed aircraft systems.

“As an FAA approved USS (UAS Service Supplier) it’s our role to support the industry and companies like MissionGO with the technology, data, and services they need to safely conduct their missions. Our AirHub platform is fully integrated with the FAA and State and Local Government agencies to provide the most up to date, authoritative data to pilots to increase situational awareness on the ground and in the air,” said Michael Healander, Co-Founder & CEO of Airspace Link.