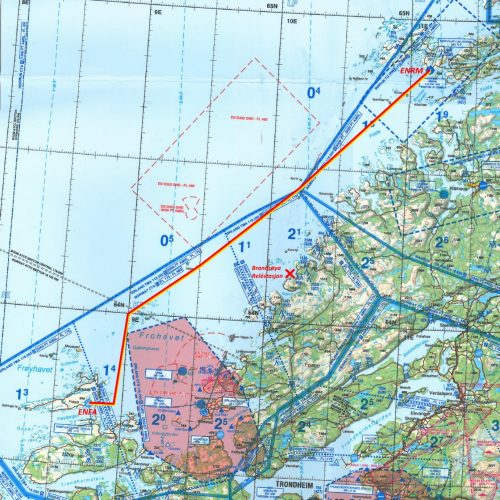 The Norwegian Defence Research Establishment (FFI) conducted a long-distance flight in June 2019 to demonstrate unmanned aircraft can support long-range drone applications such as surveillance, monitoring, search and rescue operations and applications within transportation. The FFI flew a PenguinB unmanned aerial vehicle (UAV) operated by a 2-person crew from Maritime Robotics over 200 km, starting from Frøya on the mid-western coast and passing through different types of controlled civil airspace handled by civil air traffic control.

When the aircraft approached Rørvik, the landing operator took over control and landed the aircraft smoothly. The Norwegian University of Technology and Science (NTNU) was a part of the landing crew, where they provided their mobile operations station and safety pilot to assist with the final approach and landing. Upon landing, the small UAV had been in the air for 2 hours and 12 minutes. Flying a route of 200 kilometers and landing approximately 170 kilometers from where it took off.

Wireless data link technology using phased array antennas from Radionor Communications provided communication for control during the mission, and stable communication to the ground network with range above 160 km was recorded with a lightweight transceiver installed in the aircraft.

This mission served to prove that it is possible to operate an unmanned aircraft not only on round trips from one base, but for operations involving transit between multiple bases. This is a game changer for designing flexible UAV missions and services. One example is monitoring/surveillance missions (or search and rescue missions). During these missions, the main operations area might drift or move into an area far away from where the aircraft took off. This new area could be closer to an alternative landing site, if the aircraft can land at this alternative site then it is able to stay in the air for a longer duration. Another example is freight, where it has very little effect to use UAS if the transport vehicle isn’t able to land at a different base from where it began.

Planning the mission involved Avinor, the company providing air traffic management for Norwegian airspace. It was clear that in order for the flight to be successful, a degree of flexibility was needed. Fitting the UAV with a transponder (normally used for manned aircrafts) was key to giving those responsible for airspace safety confidence in the flight plan. In order to effectively maintain command and control capabilities for the entire flight, the status and telemetry from the unmanned aircraft had to be accessible online. In this operations all control was made from Rørvik or Frøya, but in principle the flight could have been controlled from specialized crew in a control room anywhere with good network access.

The experiment was a part of the research program Hybrid Operations in the Maritime Environment (HOME), which is a cooperation between Radionor Communications, Norwegian University of Science and Technology and Maritime Robotics. This project has been partly funded by the Norwegian Reseach Council. In addition, the experiment was made possible due to important contribution from the Norwegian Defence Research Establishement (FFI), Norkring and Avinor.