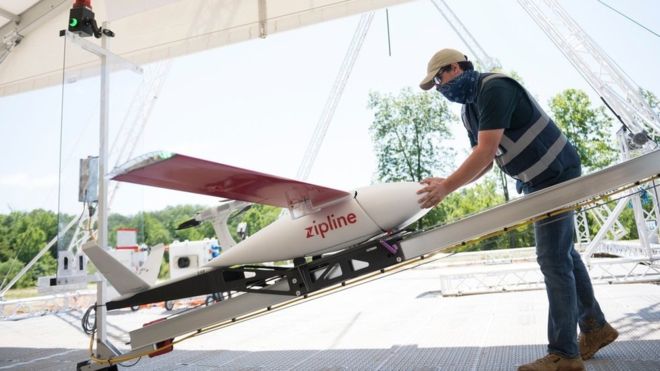 The US Federal Aviation Administration (FAA) has granted Novant Health a Part 107 waiver to begin operations.

The operation provides contactless distribution of personal protective equipment and critical medical supplies to Novant Health frontline medical teams in the Charlotte, North Carolina, metro area. The operation helps position Novant Health, which operates 15 hospitals and nearly 700 locations in the southeastern United States, to adapt quickly to the evolving pandemic and could lead to innovative uses such as testing, drug trials, and vaccine distribution in the future.

The operation will provide ongoing drone logistics flights in Class-D controlled airspace, where all air traffic is actively managed by the FAA, under a part 107 waiver issued to a major US healthcare system.

Over the next two years, the partnership plans to expand beyond emergency operations in the Charlotte area to regular commercial operations, subject to approval under FAA Part 135 rules, to serve health facilities and, ultimately, patients’ homes across the state. Novant Health and Zipline’s partnership seeks to create a next-generation model for health system logistics leveraging contactless drone deliveries.

“Zipline has been hard at work helping other countries respond to the pandemic,” said Zipline CEO Keller Rinaudo. “And we’re proud to partner with Novant Health, a true leader in health care innovation, to begin helping in the United States as well. We’re likely in for a long-term fight against COVID-19. Using contactless drone logistics will be an important tool in that effort. The work underway here in North Carolina will provide the rest of the country with a blueprint for how to build the most resilient and responsive health care system possible.”

The emergency drone fulfilment centre, which is adjacent to the Novant Health Logistics Center in Kannapolis, North Carolina, will launch Zipline drones to distribute Novant Health’s critical medical products to its area hospitals. The emergency drone fulfilment centre was made possible by Stewart-Haas Racing, which generously contributed the site.

Two initial routes have been approved by the FAA for the launch of operations. Service will begin with flights to Novant Health Huntersville Medical Center and expand in later phases. Flights to initial facilities will range in distance from 20 to 30 miles round trip.

Prior to the launch of this operation, typical drone logistics flights in America ranged between 500 feet to a mile and a half in distance.  Zipline’s drones have a round trip range of over 100 miles, making them capable of delivering medical supplies from the Novant Health Logistics Center to more than 30 additional Novant Health facilities upon approval.

The drones take off from and land at the emergency drone fulfilment center, requiring no additional infrastructure at the Novant Health facilities they serve. Deliveries are made from the sky, with the drone descending to a safe height above the ground and dropping off a box of medical products by parachute at a designated spot. The drones are capable of carrying close to four pounds of cargo, flying up to 80 miles an hour, even in high winds and rain.

The emergency fulfillment center, like those operated by Zipline in the nations of Rwanda and Ghana, can serve an almost 8,000 square mile area and micro-target the distribution of more than two tons of medical supplies a week.