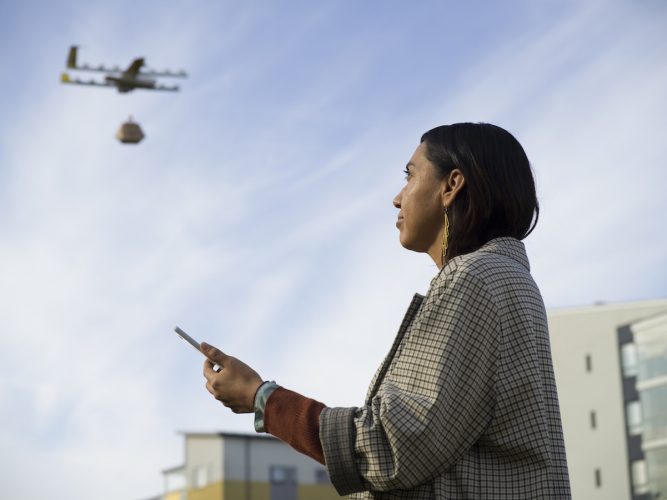 According to Reuters: “The rules eliminate requirements that drones, known formally as unmanned aerial vehicles, be connected to the internet to transmit location data but requires them to broadcast remote ID messages via radio frequency broadcast. “This approach creates barriers to compliance and will have unintended negative privacy impacts for businesses and consumers,” Wing said Thursday in a blog post, adding “an observer tracking a drone can infer sensitive information about specific users, including where they visit, spend time, and live and where customers receive packages from and when.”

“Wing added that “American communities would not accept this type of surveillance of their deliveries or taxi trips on the road. They should not accept it in the sky.”

“At a time when limiting close contact with other people became important, the use of our delivery service grew 500% in 2020 over 2019.  And while much of that growth initially occurred when people began to stay home during the pandemic, use of our delivery services remained well above pre-COVID levels through the end of the year. Even in Australia, where infection rates in our service areas declined to zero and schools and businesses reopened, we continued to see drone delivery remain a bigger part of everyday life.“

Wing has played an important role in helping to advance UAS traffic management (UTM) concepts around the world, contributing to the development of UTM systems in France and the United Kingdom, says the company.  “We participated in efforts to demonstrate UTM services, like remote identification, in the United States and Switzerland and participated in standards-making bodies like ASTM International to enable a globally harmonized approach to drone integration. In November, we demonstrated strategic deconfliction and remote identification of drones in the FAA’s UTM Pilot Program. The completion of this program was a big step toward showing that capabilities to support drone integration in the United States are production-ready today.”