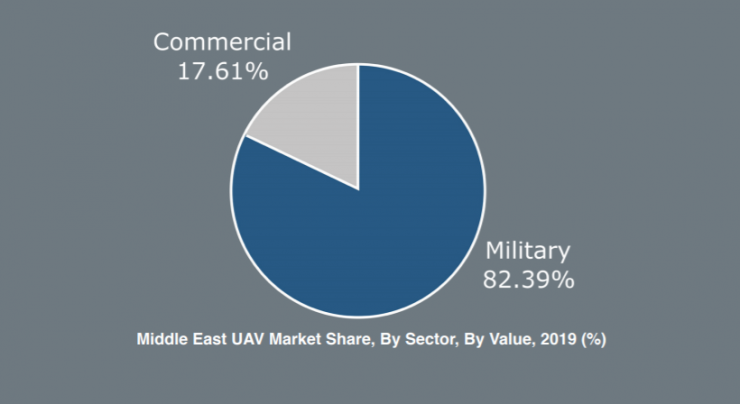 The Middle East unmanned aerial vehicle market was valued at around USD2.30 billion in 2019 and is expected to reach USD3.95 billion by 2025, exhibiting a CAGR of 9.33% during the forecast period, according to market analysts TechSci Research.

“The use of Unmanned Aerial Vehicles (UAVs) is growing rapidly across the Middle East and is majorly dominated by military and defence end use segment.…However, UAVs are finding increasing commercial applications in various domains including real-time monitoring, providing wireless coverage, remote sensing, search and rescue, civil infrastructure inspection, delivery of goods, security and surveillance, precision agriculture, etc. Smart UAVs are the next big revolution in UAV technology promising to provide new opportunities in different applications, especially in civil infrastructure for inspection and cost and risk minimization.

“The military UAV segment accounts for about 82.39% of the UAV market in the Middle East and is expected to grow at a faster rate as compared to the commercial UAV market as the use of commercial UAVs is being banned by civil aviation authorities of various countries….

“The growth of drone market is highly dependent on the regulatory framework of a country. Due to the rise in conflict in the region, many Middle Eastern countries like Saudi Arabia, Kuwait, Syria, etc., have completely banned the use of commercial drones. While few other countries like the UAE and Israel allow the use of commercial drones, their use is highly regulated and requires proper government permission. There are favorable regulations for military UAVs in most of the countries across the Middle East although a few countries like Bahrain, Oman, etc., have underdeveloped regulations, which restrict the optimal commercial utilization of drones. Presence of clearly defined policies is one of the fundamental criteria to facilitated growth of UAV market in the region.”