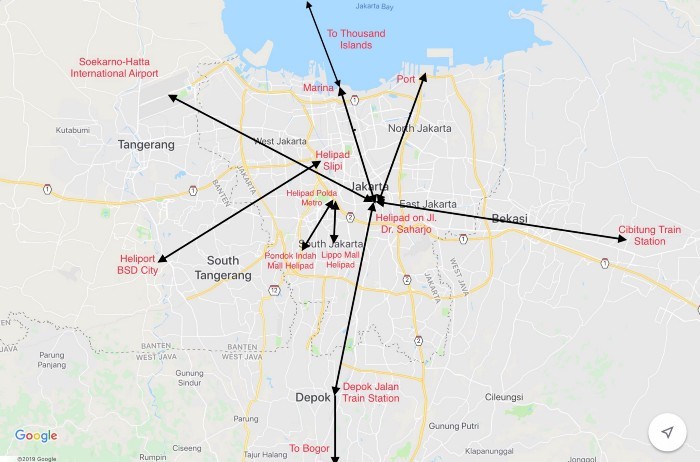 This article, by Pamir Sevincel[1] reflects an official collaboration between The Aviary Project, a London-based Urban Air Mobility community aiming to bring UAM to the UK by 2025 and Empasco, a non-profit organization that is working towards leveraging technology to achieve world-positive outcomes and is currently exploring the impact of Urban Air Mobility in the developing world.

Urban Air Mobility can positively impact the megacities of the developing world.

Jakarta, Indonesia is a megacity that has a metropolitan population of about 30 million — set to grow to 35 million by 2030 — and one of the most congested cities around the world which costs the Indonesian economy USD7.4 billion per year. It is also a region that is perfect to analyze for UAM — not just because of its many problems (to be explored below) but due to its exciting entrepreneurial activity: four out of the seven e-commerce unicorns in Southeast Asia are from Indonesia.

The following gives a great overview of some of the major problems the city is facing today and how UAM can specifically mitigate these issues in the future.

Jakarta has an urban population of 10.6 million that is growing to 13.6 million by 2030 — a whopping 30% increase in 10 years. It is a city where 3.6 million people commute into the urban neighborhoods every day which is, contrary to rational urban planning, supported mainly by private transport — only 27% of commuters use public transit options. This schema means that on average, a Jakartan wastes 4 hours in traffic every day.

Current trends in metropolitan population growth coupled with the city council allowing the suburbs to extend laterally in a sparse manner are creating bottlenecks in Jakarta’s transportation system which lead to frequent gridlock congestion. This, in turn, drives housing prices to skyrocket in the central districts, encouraging people to move to the outskirts of the city. Commuter numbers increase; wasted time on the road, ineffective transport asset utilization, and energy (e.g. fuel) waste become costs to the Jakartan economy, slowing down societal progress. To top this, Jakarta is quickly running out of physical space: building public transportation options such as overground & underground rail networks and expanding roads is not feasible. Compared to population growth, road infrastructure expands at a rate 950x slower. This is similar to someone trying to escape from a tsunami disaster by riding an electric scooter.

This vicious cycle, when incorporated with environmental decline and frequent flooding, is closed in a positive feedback loop to exacerbate the congestion even more. Thus, it becomes a nightmare not just for the people who struggle to move around every day in Jakarta but local urban planners as well.

Perhaps the most catastrophic factor that distinguishes Jakarta’s transportation problems from other megacities is its climate and imminent topography associated with human-made climate change. We can divide how the city’s climate affects transportation into two: banjir and the sinking cityscape.

Banjir, the famous Indonesian monsoon that takes place most heavily during January and February, can lead to rapid flooding in the city virtually in a matter of minutes. In fact, within 5 minutes of banjir rains, the traffic goes into a frenzy while people rush to reach their destinations to avoid being stuck in the flood for hours. If you are a tourist or do not own a car, it is almost impossible to reach your destination as taxis suddenly disappear. Frequent flooding in Jakarta adds a natural disaster layer to its congestion problems, essentially creating gaps in the city’s economic continuity throughout the year.

Secondly, there is a man-made aspect of Jakarta’s frequent flooding problems. North Jakarta is below sea-level, much like New Orleans, with the whole city having an average elevation of 8 meters. North Jakarta is very prone to flooding not solely due to harsh weather events but irrational city infrastructure planning at the local level and artificial climate change at the global one. Thanks to deforestation and irresponsible water extraction to meet the needs of the city and its inhabitants, Jakarta is sinking 17 cm a year meaning that by 2050, North Jakarta will be under water. Global rises in sea-levels due to climate change is only going to accelerate this process. If the city is sinking, what good is it to build new roads, railways, and expand the ground transportation infrastructure? Doing so means a decreased return-on-investment (ROI) and thus, cost to the economy and the people.

Urban Air Mobility technologies have the potential to alleviate Jakarta’s transportation problems to a certain degree. One can envision thousands of eVTOLs deployed around Jabodetabek as commuter shuttles, air ambulance, cargo vehicles, and other scenarios of value which would be supported by ground landing and charging infrastructure offering decent network coverage throughout the city. Through analysis on the city in terms of its mobility statistics, neighborhoods with high-value points of interest, and existing helipads, we can identify 5 various categories of routes that UAM can bring the most value in Jakarta. Here we will only be focusing on the air shuttle and air taxi use cases but other scenarios can be envisioned around these routes:

Assuming an eVTOL of 2–5 passenger capacity, low to mid social acceptance of Jakartans, and a mid to high infrastructure network coverage around the city (~75 vertiports), we can estimate a UAM market size (only air shuttle and air taxi) for Jakarta between USD500–900 million with high uncertainty about how fast UAM routes can be established, consumer demand, infrastructure availability, and the effect of weather on flight operations. To offer a competitive service in contrast to other modes of transportation, UAM will likely need subsidies from the government during its initial years. However, it is noteworthy to understand that there will be other significant economic and societal benefits that consolidate the market size introduced here. eVTOL air ambulances will save countless lives, for example, if they are allowed to land on highways to extract patients locked in traffic. eVTOL cargo vehicles may remove a magnitude of vehicles from the streets for less-than-truckload payloads. If congestion can be reduced by UAM, a portion of the USD7.4 billion economic loss due to traffic in Jakarta can be positive and added to the overall well-being of the city’s inhabitants. Thus, implementing UAM solutions to a city such as Jakarta will in effect be financially more viable compared to attempting to solve the city’s congestion through conventional methods.

But Urban Air Mobility is more than just air taxis. As the event of the year in “flying cars” — the Uber Elevate Summit — is a month behind us, the Urban Air Mobility (UAM) industry is into the summer at full steam with a few twists of realism creeping into the hype. Being at the forefront of the “futurism of mobility”, aerial taxis that are shaped by drone technologies, electrification, advances in fixed-wing aviation, big mobility data, and digitalization are promising to offer robust and reliable solutions to the problems our cities are facing today and will face tomorrow. From traffic congestion to a lack of regional connectivity and from an over-dependence on private car ownership to a lack of transportation infrastructure, aerial taxis — electric vertical takeoff and landing (eVTOL) vehicles in aviation parlance — will elevate our urban and sub-urban multi-modal transit networks into the 3rd dimension, opening up a huge amount of unused skies above us. In effect, we are bringing The Jetsons to real-life with layers of shared mobility, sustainability, and on-demand business models.

I believe that — though Uber has essentially kickstarted the hype and a good portion of the ecosystem — the majority of the industry and the public are blinded by Uber’s vision of offering on-demand urban air taxis for inner-city trips. Although Uber just announced a partnership with McDonald’s that would bring hamburgers to your doorstep through a combination of cars and drones, the real value that UAM will bring to society is not merely composed of air taxis and food deliveries. Thus, Urban Air Mobility deserves a rejuvenated definition here that encompasses a variety of use cases and business models that will make a real impact on our civilization.

It is wonderful to see that the UAM industry has its eyes on the developed world for mainly business strategy reasons. However, the greatest impact we can make in the long-term lies in those places where people need this technology the most but may not be able to afford it today. Let’s all work together as an industry and the public to not only become fixated on the on-demand aerial taxi use case for the developed world but strive to change the way people move all around the globe through our skies.

Urban Air Mobility is the transport of goods and people across urban, suburban, and sub-regional environments using aerial vehicles — both small and large. Although this concept existed since the mid-1900s in the form of helicopters, the innovation here consists of using small drones, eVTOLs (larger drone-like vehicles), and maybe hybrid-electric helicopters that are much more efficient and economically accessible to all strata of society. This definition of UAM offers us an expansive set of use cases that are only bounded by the entrepreneurial creativity and prowess. Here are a few:

Many other futuristic UAM scenarios will emerge once we start flying drones and eVTOLs widely in the next 5–10 years in increasingly diverse urban applications. 100s and maybe 1000s of use cases will be introduced as the natural course of progress, innovation, and creative destruction continue, with the entrepreneurial spirit bound only by how high drones and eVTOLs will be able to go.

Jakarta, among many other megacities in the developing world, would benefit significantly from the introduction of UAM technologies as relieving congestion would not only solve mobility issues but significantly alleviate the quality of life of the inhabitants, unleashing the potential of the economy blocked by gridlock traffic. We, as the industry and the general public in the developed world, need to contemplate and find solutions where UAM is likely to make the most impact on people’s lives around the world.

(Image: Key routes that were chosen to be representative of each of the 5 UAM route categories; note that these are not exhaustive but merely preliminary examples (Source: Google Maps)