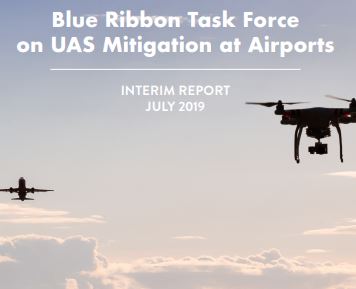 Remote identification of drones so that target information, including ID and position, can be passed to ATC automatically needs to be urgently implemented on a global scale, according to an interim report by the Blue Ribbon Task Force (BRTF) on UAS Mitigation at Airports, set up by the Airports Council International-North America (ACI-NA) and the Association for Unmanned Vehicle Systems International (AUVSI) in April 2019.

The BRTF was charged with providing recommendations to airports and the U.S. and Canadian governments regarding UAS mitigation at airports―including but not limited to reviewing UAS and counter-UAS (C-UAS) technology, airport protocols for addressing UAS incursions, and the policy framework around UAS integration and mitigation in and around airports.

The interim report represents the first phase of the BRTF’s exploration work. A more comprehensive report is underway for publication later in 2019. The BRTF puts forward the following recommendations as part of its interim report. Additional recommendations will follow in the final report.

These are the main recommendations