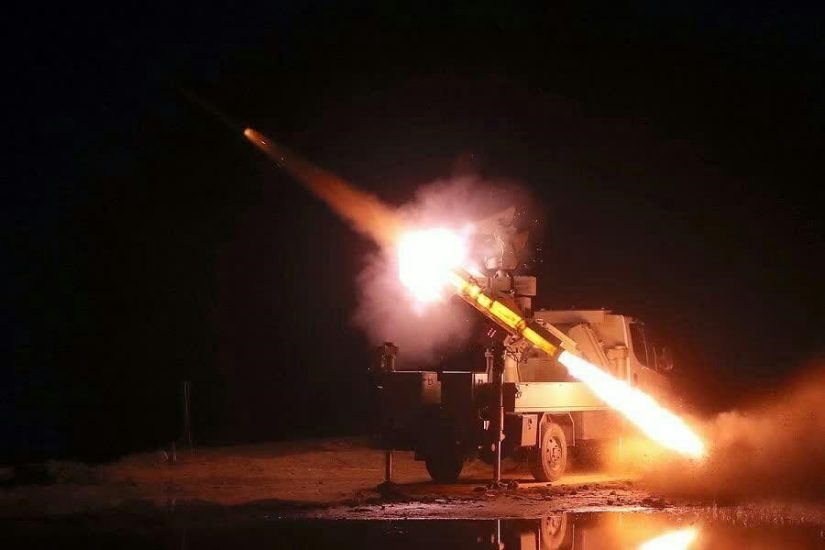 According to the reports:

“The AD-08 Majid is a short-range and low-altitude air defense missile system fully developed by the Iranian defense industry. The missile system is designed to intercept and destroy UAVs (Unmanned Aerial Systems), cruise missiles, helicopters, and low-altitude aerial targets. The missile launcher station of the AD-08 Majid is mounted on the Iranian-made Aras-2 4×4 tactical vehicle. The AD-08 was unveiled in January 2022 but mounted on the ARAS-2, an Iranian-made 4×4 tactical vehicle that was developed based on the F-4. 5 Toyota Land Cruiser chassis.

“The AD-08 Majid is fitted with a weapon station that has a traverse of 360° and two pods of four missile launcher canisters are mounted on each side. The center of the turret is fitted with electro-optical systems used to acquire targets and to guide the missile. The system is able to acquire aerial threats at a maximum range of 15 km with a traverse of 360° and elevation from 0 to 12°. It can four targets simultaneously. The missile used by the AD-08 Majid air defense system is equipped with passive imaging infrared (IIR) homing guidance system. It can hit targets with a range from 700 m to 8 km with an altitude from 20 m to 6 km. The missile has a diameter of 156mm, a length of 2,670 mm, and a total weight of 75 kg.

The AD-08 can be also integrated with the Kashef-99 radar, a 3D mobile phased array system with a range of 12 kilometers used to detect small aircraft. Kashef is a series of Iranian early warning radars developed by SAIRAN. Currently there are three versions in service, Kashef 1, Kashef 2 and Kashef 99. Kashef 99 is a 3D phased-array radar system that is carried on a vehicle, suitable for detecting small aircraft and objects and has a range of 12 km. Kashef-99 can detect 300 targets simultaneously.