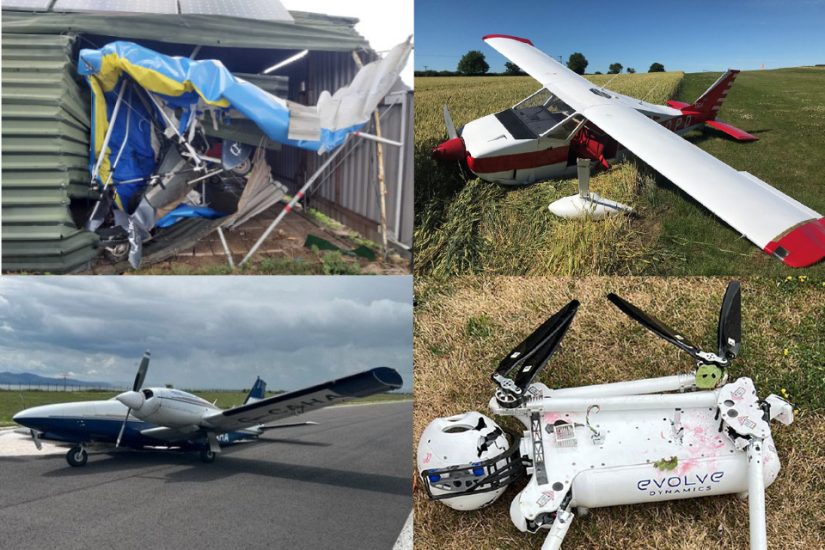 The UK’s Air Accident Investigations Branch (AAIB) in its latest AAIB Bulletin has reported on two uncrewed aircraft accidents, both occurring as a result of loss of power. The following excerpts are edited versions of the crash investigation reports.

The unmanned aircraft fell to the ground from a height of 20 m due to a loss of electrical power. This was caused by separation of electrical connections due to thermal damage of the UA and battery connectors. Damage was also found to the batteries fitted during the three previous flights. The manufacturer has updated the Sky Mantis Operating Manual to highlight the need to check the aircraft and battery connectors during pre-flight checks.

The aircraft lost electrical power in flight and fell to the ground because of separation of electrical contacts between the aircraft and battery connections. The separation was a result of a loss of structural integrity due to thermal damage to the connectors. The small scorch mark on the flight 1 battery indicates that the battery connector on the aircraft had been damaged at some point prior to, or during, flight 1. It was not determined as to how this occurred, but it is possible that foreign object debris could have entered the open battery compartment prior to fitting the battery, or that the battery was not fully locked into place during this flight. Either possibility could have resulted in an increase in intercontact resistances, causing temperature increases of the connector material that allowed pins to recede or be damaged. This damage eventually culminated in an electrical thermal run-away during the accident flight until pin separation occurred. The scorch mark on the flight 1 battery, and more extensive thermal damage evident on the flight 2 battery went unnoticed by the pilot during his checks between each flight.

The UAS, an Alta X, was being operated commercially to provide video footage at the Henley Royal Regatta when a low voltage battery warning occurred in flight at a height of 50 m. As the aircraft was being flown back to the landing site, the aircraft battery voltage reduced to the point where controlled flight was lost. It fell, in near free fall, and impacted a boat on the river, causing damage. No persons were injured. The pilot could not recall checking the aircraft’s battery voltage prior to takeoff, and the low voltage battery warning had been changed to trigger at a lower level than that recommended by the manufacturer.

The risk assessment performed by the operator had identified that a loss of battery power in flight could result in a ‘catastrophic’ outcome and was classified as an ‘unacceptable risk’. However, the operator’s classification reduced this to ‘Low Risk’ when mitigations were applied. These mitigations included checking the battery voltage level prior to takeoff. However, the pilot, could not recall performing this check. The aircraft was operating its sixth flight since the batteries had been changed, which was twice that intended by the pilot. He suggested that he may have been fatigued and perhaps the desire to film as many races as possible provided further pressure which may have also distracted him. This may provide possible explanations as to why the aircraft’s batteries were not changed prior to the accident flight as intended by the pilot. The pilot stated that he would takeoff when the battery voltage was less than 48 V, which he considered was acceptable when making short flights. This differed from the manufacturer’s guidance of ‘above 48 V’, although this value was based on the aircraft being operated at its maximum weight. Although, the operator’s risk assessment stated that the pilot and ground crew would monitor battery voltage, neither the camera operator nor observer had been briefed prior to takeoff as to what voltage was acceptable.

Therefore, neither would have been able to assist the pilot in identifying that the battery voltage was getting low. The manufacturer’s default trigger threshold for the low voltage battery warning was 44 V, and this was also the level at which it recommended that the aircraft should be landed as soon as possible. This warning threshold had been changed by the operator to trigger at 42 V. Shortly after the low voltage warning had occurred in flight, the battery reached a critical voltage level at which point controlled flight was lost and the aircraft then descended in near free fall. The aircraft’s kinetic energy when it collided with the boat was estimated to have been about 13,700 Joules. The CASA research paper indicates that fatal injuries would have occurred if the 28 kg aircraft falling at 30 m/s had struck a person on the boat.

Whilst returning to land following a trigger of the low battery voltage warning, the aircraft’s battery voltage depleted to the extent that controlled flight was no longer possible. The aircraft descended, in near free fall, and impacted an occupied private boat on the river. If the aircraft had struck a person on the boat, it is likely that fatal injuries would have occurred. The pilot did not replace the aircraft batteries when he had intended to, and a pre-flight check of their voltage before the accident flight was most likely not performed. In addition, the low voltage battery warning had been set to a level below that recommended by the manufacturer. Had the battery warning been set to the manufacturer’s recommended setting, the aircraft may have been landed safely under the pilot’s control.