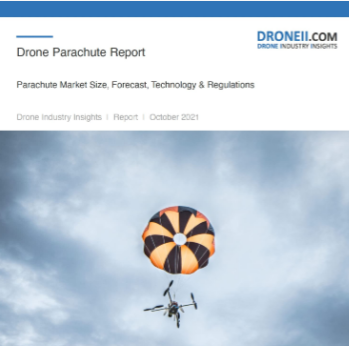 A report published by Drone Industry Insights values the drone parachute market in 2021 at USD5.4 million. It estimates the market will grow with a compound annual growth rate (CAGR) of 63% to almost USD62 million by 2026. the 66-page report examines market and size and five year forecast along with equipment analysis, company profiles for the 11 leading manufacturers, and regulatory factors.

Parachutes specifically made for drones are designed to avoid damage to people or objects on the ground and to protect the drone from being destroyed. Drone parachutes can be designed as either a recovery system (to prevent the drone from crashing) or as standard landing device (e.g. fixed-wing drones), where most parachute manufacturers design both. Deployment can be manual or automatic, and it can be carried out through gravity or ballistic/kinetic mechanisms. Some drone manufacturers or drone operators also equip drones with two parachutes to comply with redundant system requirements.

According to the report, there are two possible variants of standards for the production and use of parachute systems: technical and procedural standards.

Technical standards refer to the construction of parachutes to meet certain safety criteria. As a technical standard, the ASTM F3322-18 was defined and published by the American Society for Testing and Materials (ASTM). This was done in collaboration with drone parachute manufacturers and drone industry players such as MITRE, DJI, Amazon, and others. This standard was particularly issued to address the requirements for design, manufacturing and testing of deployable drone parachutes. Today drone operations which are compliant with this standard are more likely to obtain a waiver from most National Aviation Authority (NAA) to operate drones over people.

Procedural standards mainly focus on risk-assessment methods, where the most famous standard was defined by the Joint Authorities for Rulemaking on Unmanned Systems (JARUS) and is called the Specific Operations Risk Assessment (SORA). This standard is approved in many countries as an acceptable means of compliance with the regulatory requirement of “performing a risk assessment to enable complex drone missions”.

Drone parachute standards are currently not explicitly required under FAA, EASA or other regulatory body, but future requirements for airworthiness might force drone manufacturers to equip specific drones with drone parachute systems, especially when flying over people.

Considering the expansive growth of the drone market (CAGR of 9.4%), this will automatically lead to higher demand for drone parachute systems in the next years. Another factor that will contribute to the growth of drone parachutes is the increasing relevance of BVLOS operations and flights over people. Once the necessary regulations are in place and in effect, a lot of drone applications will require a parachute system.