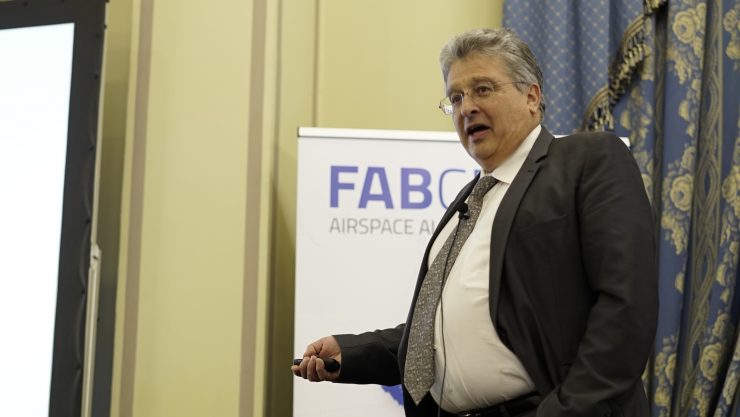 “It will no longer be a question of how to fit drones into airspace management, but instead, how airspace management should fit into UTM,” Professor Matthias Finger from the Florence School of Regulation told delegates attending the workshop on Fragmentation in Air Traffic Management (ATM) held in Budapest 14-15 May 2019. Organised by the Functional Airspace Block Europe Central (FABEC) and FAB Central Europe (FAB CE), and hosted by HungaroControl, the international forum heard that digital platforms are likely to become the primary interface between the airspace user and infrastructure services, pushing air navigation service providers (ANSPs) further from the customer. “Digitalisation can coordinate all the fragmented actors within the system, and in ATM there are many different ANSPs and many airspace users,” explained Professor Finger. Furthermore, the process is accelerated by progress in satellite-based navigation technologies and takes the form of a new infrastructure layer which sits above the ANSPs.

Fragmentation within the system means digitalisation is more likely to occur, and the additional pressure of rising demand and reduced emissions sets ATM on a course towards “a digital Single European Sky (SES),” he added.

Digitisation leads to increased efficiency and has the potential to integrate many actors into the system. It helps to coordinate different elements and supports specific charging mechanisms. There are savings from reduced costs, reduced emissions, and increased capacity. Nor will it stop at just ANSPs, but can incorporate airports and other actors.

“A top layer of digital infrastructure is inevitable and it is just a question of time before we get there.” Professor Finger listed a number of impediments which could slow down the system, some of which were discussed in detail at the forum. For example, national sovereignty contributes to the fragmented structure of European airspace, and military obligations result in segregated activities. Government industrial policy may also slow down the rate of new entrants and legacy providers may decide to club together to offer their own digital solutions.

Nevertheless there are forceful drivers for change. These include technological developments, widespread digitisation and access to satellite technology. Public policy from the European Commission favours digitisation and will be reflected in future regulatory measures.

The question hovering over the industry now is who provides these digital platforms? The Network Manager is a strong contender in Europe, with some experience of data services and digital delivery mechanisms. Manufacturers and suppliers also see an opportunity to grow their business, possibly in cooperation with ANSPs. The major airframe manufacturers such as Airbus and Boeing could also step into the market, and the larger airline alliances might be interested. However the strongest contenders are newcomers from outside ATM who hold no affiliations within the industry and can aggregate any parts of the system. Are the likes of Google or Amazon the most likely to become the digital platform providers of the future ATM industry?

“Drones and higher airspace operations will be the playground where these things will be experimented first in the form of UTM,” concluded Professor Finger.