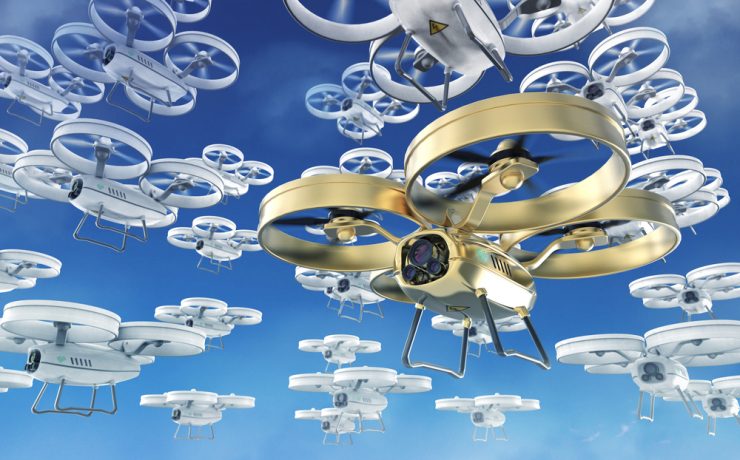 Civil Unmanned Aerial Systems (UAS) will be the most dynamic growth sector of the world aerospace industry this decade as commercial applications take off and civil governments adopt systems for new roles in border security and public safety, according to a market study and press release from Teal Group. “The pandemic is reshaping growth in the industry, boosting support for delivery drones while hurting investment in some longer-term applications,” said Philip Finnegan, Teal Group’s director of corporate analysis and author of the study. “On balance, the negatives appear to slightly outweigh the positives.”

According to the company, the goodwill created by delivery of medical items by drone will help speed regulatory approval for wider deployment of drones and has encouraged companies to adopt UAS to do distance inspections of facilities. Yet the pandemic has sharply cut venture capital financing of drone companies, major aerospace companies are cutting investment in next generation systems, and the oil and gas sector is slashing capital spending.

Teal Group’s 2020/2021 World Civil UAS Market Profile and Forecast forecasts that non-military UAS production will total USD108 billion in the next decade, soaring from USD5 billion worldwide in 2020 to USD18.4 billion in 2029, a 15.6% compound annual growth rate in constant dollars. The study includes annual forecasts of commercial, consumer and civil government systems and the individual submarkets. Teal Group, an independent aerospace and defense research and analysis company, has provided support for the FAA in the preparation of past annual commercial UAS forecasts. Commercial use will drive the market as consumer drone purchases slow and government purchases remain a small but growing portion of the market, says Teal.

“A growing number of corporate clients are now moving from proof of concept work to deployment of fleets, helping to drive the commercial market,” said Finnegan. That is driving more than a 21% compound annual growth rate for commercial UAS production over the ten-year forecast. “The growing promise of the civil market is attracting the world’s leading technology companies, driving ever faster development of systems and business applications,” said Finnegan.

Other Teal conclusions are that delivery as a premium service promises to lead market growth in the United States, with the segment emerging as the leader by the end of the forecast period. Agriculture will be the leading sector overseas by 2029 thanks to heavy Chinese investment in subsidizing agricultural drone spraying. Industrial inspection will emerge as a major commercial drone market over the next decade. Construction will be the largest segment of industrial inspection over the next decade, according to the Teal study. All 10 of the largest worldwide construction firms are deploying or experimenting with systems and will be able to quickly deploy fleets worldwide. Industrial inspection also includes other major segments such as energy, mining and railroads, ranked in order of size over the next decade.

“Civil governments are deploying an increasing number of unmanned systems. The United States and European governments have new pilot programs to deploy systems to protect land and sea borders. The United Nations and other peacekeepers are deploying systems to provide protection. Use by law enforcement, particularly in the United States, is soaring,” says teal. “Firms in traditional aerospace, data analysis, semiconductors, telecommunications are all driving aggressively into serving this diverse civil market. Technology companies like Intel, Qualcomm, Microsoft, Apple as well as venture capitalists have poured more than USD2.8 billion into drone startups from 2012 to 2019, according to the Teal Group study. US start-ups have received 65% of the funding over the period, enabling them to take the lead in development of drone analytics. Chinese firms, which have received 16% of the investment, are focusing on continuing their lead in hardware, moving from consumer to commercial systems. Europe is lagging at 9%.

“While funding still goes for new drones focused on specialized markets, increasingly the venture capital funding is shifting from hardware to software and services that will make drones more useful. Funding is being used to develop the scale needed to serve large corporations. National networks of service providers and improved analytics to make UAS easier to use and more productive are key priorities. Companies laying the foundations for access to airspace such as detect and avoid technology and unmanned traffic management are also being funded.