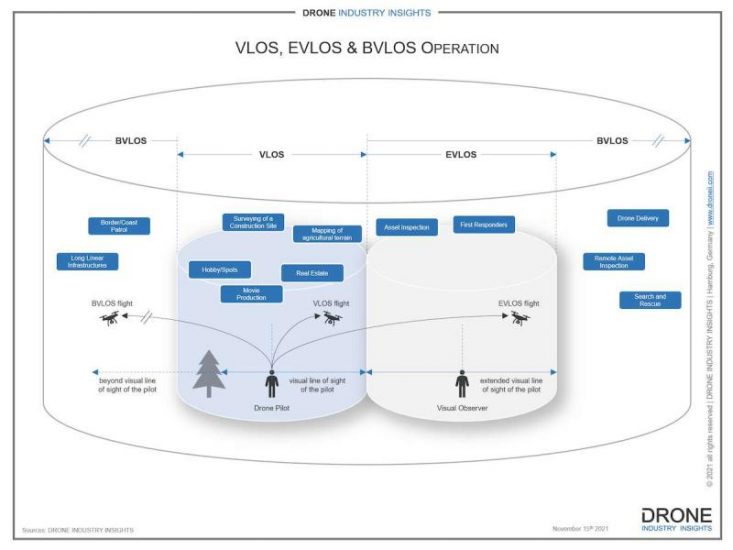 Drone flights beyond-visual-line-of-sight (BVLOS) remain limited due to regulation says a recent report by Drone Industry Insights in a re-visit of the topic and examination of how to leverage BVLOS operations.

In some ways, it’s as if the entire industry is holding its collective breath for regulations to be approved and take effect so that widespread BVLOS operations can officially get off the ground. But developments such as the FAA’s establishment of a “UAS BVLOS ARC Charter” in June 2021 suggest that BVLOS flights will finally become more regular soon.

How BVLOS Operations differ from VLOS and EVLOS

In VLOS (visual line of sight) operations, the distance a drone can travel from the pilot is typically limited to about 500m (and many aviation authorities set this as the maximum on regulations). This means that if a pilot wants to expand operation beyond this limit, the drone, the pilot and all equipment have to constantly be moved to a new location to continue operation in another 500m radius. Typical VLOS drone applications take place in the vicinity of a pilot – e.g. wind turbine inspection, mapping of a construction site, aerial footage for real estate, or movie productions. But for some businesses such as drone delivery this is not just inefficient, it makes drone operation practically impossible.

EVLOS (extended visual line of sight) operation increases the operational radius of a drone by using a visual observer as an extra pair of eyes. Connected via radio/phone, the observer can alert the pilot whenever necessary. Although this expands the operational radius, it also requires more manpower and logistical effort. Scaling drone operation under EVLOS conditions requires a proportionally growing team of observers which once again creates an issue of efficient use of resources.

To unlock the full economic potential of commercial drone operations, flights must be operated beyond the visual line of sight (BVLOS). This allows drones to simply accomplish more in a single flight and ultimately allows operators to benefit from long-distance drone operation, providing a maximum of cost-effectiveness. Among others, BLVOS operations include flying behind buildings in urban areas, transporting goods from the shore to an offshore oil rig, or remote operation from a different country thousands of kilometers away. Once regulations take effect to allow for widespread BVLOS operations, companies will be able to leverage drone potential to its fullest.

Economically leveraging drone operation means using all the capabilities of a pre-programmed flying robot. To qualify leverage for today and the future, it is important to distinguish between different modes of operation. While in some cases a pilot is and will remain necessary (e.g. the active search for damages during inspection), making the human-in-the-loop obsolete will increase the overall efficiency of drone operation even more. So, to highlight how much impact BVLOS operations can have on the use of drone technology, let’s make use of an analogy.

In the same way that a washing machine can replace manual washing, a drone can replace delivery by a person. The first step for both the drone delivery and the washing machine would still require manual operation of the device by a person. “VLOS operation” would entail a person monitoring speed and temperature of the wash (or the flight of the drone), and actively controlling the sequence from pre-wash to wash to spin cycle (or the flight path from A to B to C). Meanwhile “BVLOS operation” would mean that the person can sit away from the machine/drone without looking at it, but still has to actively control the entire process.

“VLOS-on-waypoints” operation would be equivalent to a pre-programmed wash or flight, yet the person still has to be present and visually monitor each sequence to ensure that everything works properly. “BVLOS on waypoints” would entail monitoring the process from afar but being able to intervene if necessary. The highest level of replacement would be “BVLOS and fully automated“, meaning that the process starts and stops by itself without any input from an operator. This is what most of us are currently used to in terms of washing machines, and this is what an ideal drone delivery would look like, but we are not there yet on the latter case. Full automation and safely taking human operators out of the equation will allow for the most productivity and profitability of using drones for all types of business applications.

Of course, this oversimplification still has some issues. The first issue is that drone automation, operation and airspace integration are a lot more complex than using a washing machine at home. Even though many industry players correctly claim that their solutions are technically capable of operating fully-autonomously, a lot of regulatory and liability questions are still unanswered. In the “BVLOS on waypoints” scenario, the operator-in-charge is fully liable for any accident, even if s/he might sit in a different country while operating the drone. And at this point there is also no regulatory framework for “BVLOS and full automation” on the horizon, though it is likely that a waiver-based or risk-based approach will eventually allow for this kind of operation.