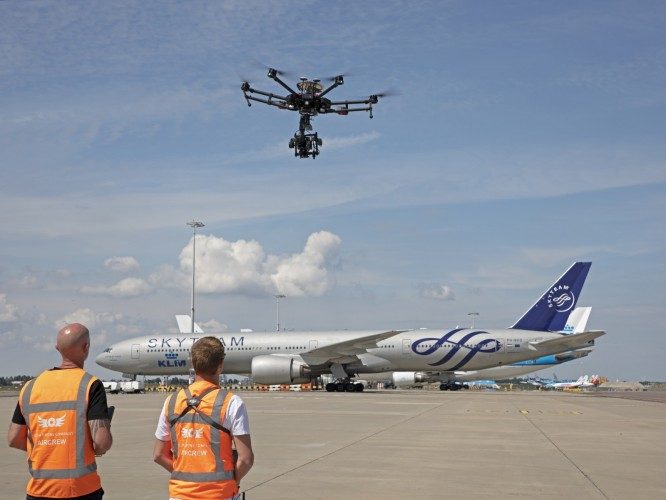 Amsterdam Schiphol has launched a week-long trial to investigate possible benefits of drones and how they can be safely integrated into the airspace.

The programme uses drones with cameras to inspect taxiways, small buildings and aircraft; and drones to transport light goods between different locations at the airport. Activities include asphalt surface inspection, de-icing processes, and supply of aircraft maintenance parts. The trial is conducted in collaboration with Air Traffic Control the Netherlands (LVNL), Dutch Drone Delta, Royal Netherlands Marechaussee and Transavia.

According to the airport press release, regulated use of drones is possible until 24 June at Schiphol. The Ministry of Infrastructure and Water Management introduced a temporary regulation that removes the prohibition on the regulated use of drones by designated parties in Schiphol’s operation. The Human Environment and Transport Inspectorate subsequently assessed the specific applications positively. All other prohibitions and obligations continue to apply. The flights, in coordination with LVNL, are carried out by certified parties who are in direct contact with the control tower. The other use of drones by unauthorized persons in the vicinity of Schiphol remains unchanged and expressly prohibited. LVNL has taken the lead in obtaining this temporary arrangement.

The tests will take place at a safe distance from runways and taxiways in use for air traffic. There will be visible testing on the different designated platforms and at different heights with various drones. The research should, among other things, show how the designed procedures for the use of drones at airports work in practice.

José Daenen, Director Operations at LVNL said: “Our plan is to integrate drones into our airspace in the future, so that unmanned and manned air traffic can operate safely side by side. That is a challenging task. We see the current, quieter airspace as an opportunity to practice with this and test procedures. In this test, we can gain first experience of how we can safely fly manned traffic and drones at Schiphol.”

Stephan van Vuren, initiator of the Dutch Drone Delta said: “Drones and manned aviation will increasingly share airspace in the future. The most concrete form of this interaction will take place at the airport, which is why conducting this test is an important step. In the Dutch Drone Delta, we will be looking at the procedures, technology, but also public support. What do airport users and employees think about flying drones?”