“With the release of new Air Control functionality in September – including our new Skydio integration – we also opened access to Air Control’s web, mobile apps, and developer tools to all users,” writes Aloft CEO Jon Hegranes in a blog post on the company’s website. “The result was a record month across the Aloft platform, highlighted by powering over 37k LAANC airspace requests for our recreational, commercial, and government users. This represented over 84% of the 43k total LAANC requests the FAA received in September.

“Following a record month across Aloft’s patented Dynamic Airspace UTM platform, we are also excited to announce the release of the FAA’s v6 LAANC upgrade, immediately available in all Aloft Air Control web and mobile applications. We appreciate Aloft’s mission-critical role in your daily drone operations, and this new upgrade is immediately available to all users.

“Aloft’s network of drone users continue to set new records for commercial (Part 107) airspace requests and total requests ever processed in our secure UTM platform. New functionality on Air Control – such as new web tools for LAANC to edit, duplicate, print, sort, and export – had record usage by our commercial pilots to gain access to controlled airspace. Exclusive data from Aloft Geo for situational awareness – featuring over 2 million square kilometers of safety data from authoritative sources like NASA, NOAA, Pennsylvania DOT, and the FAA – is providing a complete picture for Aloft pilots to plan safe and compliant drone flights.

“Four years ago, Aloft became an FAA-approved UAS Service Supplier (USS) for LAANC airspace authorizations. That month we did 159 LAANC requests. As we’re now processing over 37k requests and see more than 84% of all LAANC activity, we wanted to share some insights into this first, critical step in the evolution of UTM. There are positive signs around commercial adoption, but also some elements of concern for the future of airspace integration.

“Record LAANC numbers and milestones like 1 million authorizations only mean so much without knowing the denominator. When we dug into the data, we estimated that only 20-30% of drone flights in controlled airspace have LAANC authorization.

To estimate the compliance rate, we acquired radar data for drone detection around a few select airports to give us the total number of flights (the denominator). We then took the total number of Aloft airspace authorizations, and with our market share, we can estimate how many flights were compliant. 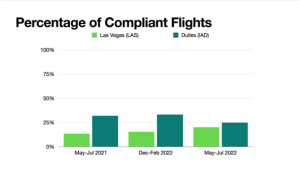 “We have done this analysis at Dulles (IAD) and Las Vegas (LAS) airports over three 3-month periods. The trends at IAD are getting worse. The trends at LAS are getting better. But they both show an estimate that only a small percentage of drone flights have the proper approvals.

“Along with sharing this information with the FAA, Aloft chairs the Drone Safety Team Data Working Group where we have presented this data. There are multiple ways to address this growing safety issue, from more education and outreach to more technology improvements for the LAANC program to unlock USS in providing these critical airspace safety services. 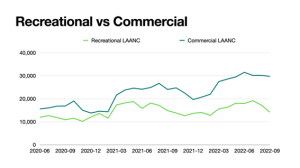 “Three years ago LAANC expanded to include the ability for recreational pilots to request authorization. This was a huge upgrade to LAANC, and adoption grew quickly in the first year. By June 2020, there was less than a 4k monthly delta between recreational (~12k) and commercial (~16K) monthly authorizations.

Fast forward to September 2022 and the monthly delta has ballooned to nearly 16k.

“As recreational pilots represent the majority of drone pilots, it’s critical for this group to have education and access to LAANC functionality in an expanded envelope of what is offered today. The current LAANC structure is providing limited access versus what could be offered to the masses of drone pilots.

“While LAANC provides authorization to fly in controlled airspace, there really isn’t much interaction with Air Traffic Control (ATC) – with the exception of “further coordination”. Further coordination (“FC”) LAANC is available only to commercial Part 107 pilots and it enables pilots to request authorization above the pre-approved ceilings, such as requesting to fly up to 100ft in a 0ft grid.

“FC LAANC requests only make up about 10-15% of all commercial LAANC requests, but they provide a valuable tool for pilots to access valuable airspace. The downside to FC requests is they require manual review by ATC to get approved, and based on Aloft data (where we processed 85.8% of all FC requests in September), there is a major communication breakdown. In fact, across our total history of FC data, we track over 200 airports that have a 0% response rate. Use the interactive map below, to view each of the airports which currently have a 0% Further Coordination response rate. The colors on the map are a heat map representing the number of futher coordination requests each of the airports have received to-date by total number. Red areas indicate the highest density of further coordination requests submited by operators to date for each area to blue being the least number. Click on each red pin for further information about the total number of futher coordination requests a select airport has received to date.

“From large and busy airports like San Francisco (SFO), which received the highest number of FC LAANC requests, to small Class D airports like Charlottesville (CHO), hundreds of airports are simply not responsive. Most FC requests time out, as USSs are required to cancel FC requests within 24 hours of the planned start time if ATC has not given a yay or nay.

“Some very responsive airports, like Austin (AUS), approved 78.5% of all FC requests submitted through Aloft. No doubt, ATC operators have higher priorities at times. Still, we are encouraged by airports like AUS that demonstrate their attentiveness to all aircraft flying in their airspace – whether legacy airplanes or drones.”