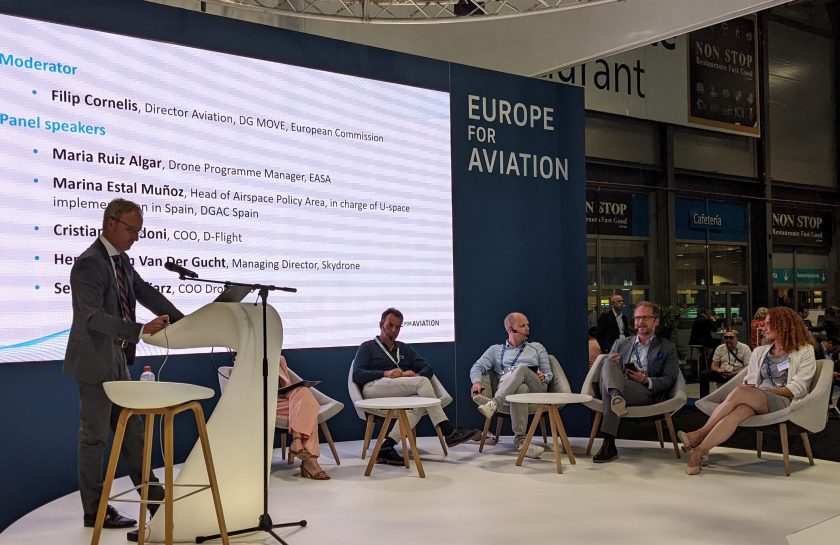 “When we talk about drones, we have to take into account this new U-space environment, an Internet of Things in the sky,” said Sebastian Babiarz, Co-president of the Global Uncrewed Traffic Management (UTM) Association (GUTMA) and COO of Dronehub at the World ATM Congress in Madrid 21-23 June 2022. “Only when we start executing drone services will we really understand the missing parts. We say U-space is mandatory, but U-space is useless without drone services.”

Moderating a panel addressing compliance with the European Union Aviation Safety Agency (EASA) U-space Regulation (EU) 2021/664 which comes into force in January 2023, DG MOVE Director Aviation Filip Cornelis described planning & adopting this basic law as “the easiest part”. There are a lot of moving parts to bring together and synchronised in order to reach the end result. “We are just at the beginning, and we need continuous interaction between regulator, certification authority, service provider and customers, and to adapt on an ongoing basis.” He said EASA’s Acceptable Means Compliance and Guidance Material (AMC & GM) first released in December 2021 and currently being updated is a flexible tool that allows this happen.

Pre-empting the legislation, the Spanish Ministry of Transport published its U-space national action plan earlier this month. DGCA Head of Airspace Policy Area policy Marina Estal Munoz said. “It is not easy in Spain; we have many aviation authorities including DGCA, CAA, NSA, MoD and ENAIRE. We still have to address designation of U-space airspaces.” This requires coordination mechanisms that comply with the regulation and a preliminary picture of U-space airspace needs.

AS a result, DGCA has created a working group to act as a link between traditional air navigation services’ management and the new way of doing things. The aviation authority also plans to launch a public consultation later this year to gather proposals from local and regional entities. “We have an old system in Europe with flexible use of airspace involving civil/military coordination. We need to balance the needs of this traditional airspace structure. If our bottom-up approach is not successful we may designate U-space airspace for trials.” 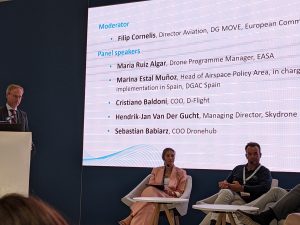 An early starter in UTM, air navigation service provider ENAV initially believed the services would resemble national ATM provision. “EASA regulation 664 has dramatically changed our initial business plan,” said Christiano Baldoni COO of D-Flight, a private-public partnership created by ENAV and Telespazio. “Now we are preparing ourselves for a competitive approach to U-space service provision.” D-Flight has been providing basic U-space services since 2019 including registration of UAS operators and airspace definition, but these activities are likely to be transferred to ENAV along with the role of Common Information Service Provider (CISP) he said.

“D-Flight will compete on the open market for U-space service provision and we are working with ENAC (the regulator) on the means of compliance and competency materials.” He said several elements need to be in place to meet the January 2023 deadline. Not least, D-Flight is subject to public tender rules that would make it uncompetitive against more agile private sector service providers. “In addition to certification as a U-space service provider (USSP), there is the designation of the first U-space portion of airspace. At the moment there are more questions than answers.”

A more recent market entrant, Belgium has established the private company SkeyDrone – a joint venture between Skeyes and Brussels Airport – to deliver services according to the USSP certification requirements. According to SkeyDrone Managing Director Hendrik-Jan Van Der Gucht, the company successfully meets the conditions stipulated in Article 15 and is working on many others. “Together with a software partner we are building a U-space services platform and can offer a comprehensive set of services to operators. This is a combination of regulated U-space services and some enhanced value-added non-regulated services.” However, the activity is slowed down by the absence of some standards and need for final AMC and guidance materials. “Part of the U-space service performance requirements will only be identified when we do the airspace risk assessment so we still face quite some unknowns regarding the software services”.

Among other U-space building blocks, SkeyDrone identifies surveillance services “without which there will be no U-space” he said. “Building a reliable and safe surveillance layer is where we focus most of our time today. This is a combination of new partnerships, for example with telcon operators, to prototype, test and validate network remote identity, as well as companies who already possess interesting surveillance data. These include Skeyes and other detection networks that could be of interest to U-space service providers.” SkeyDrone has not ruled out the possibility of investing in its own infrastructure to fill in the coverage gaps.

Funding U-space services is a widely acknowledged challenge. “USSPs tend to be start-ups with limited capital. Do we think UAS operators will be ready and prepared to pay us as U-space service providers to recover the costs and investments we are making as of January 2023?” asks Hendrik-Jan Van Der Gucht. In addition to surveillance, USSPs have an obligation to implement a safety management system and need aviation liability insurance.

To mitigate the risk of late implementation of U-space in Belgium, SkeyDrone is preparing for advanced, automated, beyond visual line of sight drone (BVLOS) services by working on a parallel scenario, based on EASA easy-access rules, with its partners.  “We have developed software BVLOS enablement that would allow us to activate the drone service market, in particular in the Specific category”. He added the Belgian CAA also faces the challenge of rapidly becoming the competent regulatory authority in an entirely unfamiliar sector.

Helping to navigate the rocky road to certification, GUTMA has created a task force to understand where there are gaps in the regulation and identify how they can be addressed. “GUTMA is trying to harmonise all the activity, not only Europe but internationally, to assess the missing parts and where we need to adapt regulation and standards,” said Sebastian Babiarz. The association has released on policy paper on the next steps to building the drone service ecosystem.

“All the necessary elements are not defined yet to support U-space in January 2023, nor has industry implemented them. GUTMA is identifying all existing international standards, from ASTM, Eurocae and others, and matching them with U-space services to support the path to implementation.” The association is also defining the value chain to see where the money is going to come from, and the responsibilities between the different ecosystem stakeholders.

EASA’s Maria Algar Ruiz offered a more optimistic outlook: “I expect the first U-space services in January 2023, though there may not be many in some portions of airspace. They could be below 500ft (120m) for example in uncontrolled airspace, maybe a portion of controlled airspace with a level of segregation, maybe to protect an airport. We will see initial certification of service providers. Not because it is good to have it, but because the operators need it.”