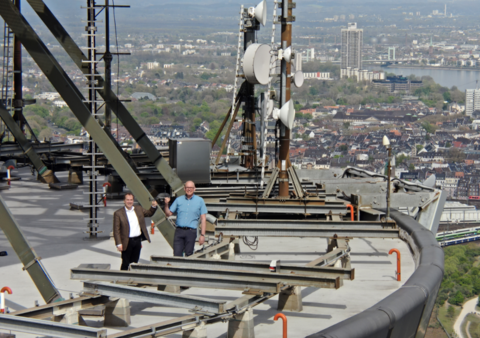 According to the Droniq press release:

Since the beginning of the year, commercial drone users have been able to apply for a permanent operating licence for the first time for pre-defined drone operations – the light UAS operator certificate (LUC). The concept introduced as part of the EU Drone Regulation is now being implemented for Germany for the first time: DFMG Deutsche Funkturm and Droniq, are applying for a LUC for the aerial survey and maintenance of radio towers using drones as part of a partnership. The partnership kicked off with the aerial survey of the Colonius TV tower in Cologne at the end of April 2021.

The LUC reduces the application burden for commercial drone use. Companies can apply for a type of permanent flight permit for predefined drone operations. The previous procedure of having to apply for, check and approve each individual flight is no longer necessary. Companies are thus more flexible and faster in their drone use.

Droniq handles the entire application process for the LUC. It also provides training and develops risk analyses for drone flights. Droniq secures the flights by providing a combined aerial situation picture representing manned and unmanned aviation. The basis for this is the first fully operational traffic management system for drones (UTM) in Germany, which is marketed by Droniq.

“The implementation of the first LUCs will give commercial drone use in Germany a further boost,” predicts Droniq CEO Jan-Eric Putze. Droniq’s mission is the safe and fair integration of drones into the airspace.

“The aerial survey of the Colonius provides us with detailed images and data about the building fabric in areas of the tower that would otherwise require a great deal of effort to inspect. The LUC will help us to accelerate the further digitization of our site management,” says Bruno Jacobfeuerborn, Spokesman of the Management Board of DFMG Deutsche Funkturm GmbH. The company has already been using drones for the inspection and planning of radio sites since 2019.

Deutsche Funkturm operates more than 32,500 radio sites in Germany, including most of the large television towers such as the Colonius. With numerous antennas for various services such as broadcast, mobile, directional and government radio, it is one of the most important and complex radio sites in the region. The almost 40-year-old and 266-metre-high structure is exposed to extreme weather conditions and is therefore intensively maintained. For such tasks, Deutsche Funkturm will increasingly use modern drones in the future. Deutsche Funkturm already has its own nationwide network of trained pilots with modern drone hardware and will continue to expand this with the support of Droniq.

Application by the end of the year

The certification process for the LUC extends over several months. For this, all central elements surrounding the planned drone deployment must be explained in writing. This concerns, for example, the type of use. Further information to be provided relates to the implementation of quality controls, risk management and the drones used.

DFMG and Droniq are currently planning to submit the documents for the LUC to the German Federal Aviation Authority (LBA) during the fourth quarter. In view of DFMG’s digitalization strategy, the Fleetplan software from the company of the same name will be used for this purpose. This enables the digitalization of the entire workflow involved – from the creation of documents and their approval by an authority to their publication in the company.