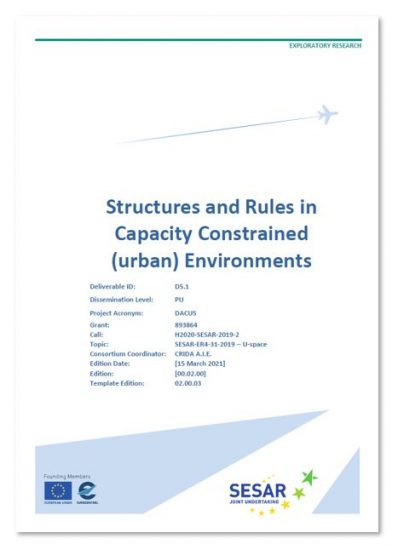 The report depicts the drone operational environment above populated areas as it is foreseen when a U-space demand and capacity balancing process will be useful.

Demand and Capacity Balancing is required where the amount of drone operations justifies the use of this service. Within the scope of the DACUS project, it has been identified that the urban environments would mainly be the location where high-density operations will take place in the near future. In order to lay down the environmental framework for a Concept of Operations for Demand and Capacity Balancing in U-space, an exhaustive description of the urban environments was necessary to well understand in which context the DCB service would be triggered and come into use.

The document is divided into four different sections: The section 3 describes the ground environment in urban areas, taking into consideration aspects such as the population density, movement of the population during the day or the social impact of drone operations. It also provides a picture of the airspace around and above urban areas. Are considered all the different kinds of operation which will occur in urban environment, whether they are manned or unmanned, the different current ATM and future U-space that may structure the urban airspace.

This section ends with an overview of the Communication, Navigation and Surveillance (CNS) performances in urban environment, at least at the state of current knowledge. Sections 3 includes three subsections each containing a set of identified flexibilities and a set of DCB measures for each of them. Each characterization is also followed by an assessment of the impact on drone operations and on demand and capacity. Section 4 depicts the regulatory framework as it is known today for manned and unmanned operations over urbanized areas. This section also provides the results of the several consultations performed through surveys (results are detailed in appendix A and B) and bilateral meetings alongside citizens, European cities’ authorities, National safety agencies or representatives of France, Germany and Spain and the European Aeronautical Safety Agency. Given that the different regulations are still in progress, what this section provides seems to be some tendencies, feelings of what the regulations may looks like.

Section 5 is the results of bilateral meetings with Spanish, German and Italian Air Navigation Service Providers (ANSP), as well as personal involvement of the writer in the French U-space program. The section describes how the four National ANSP see their national U-space and their involvement. In addition, the document shows the roadmap for each country (Spain, Germany, Italy and France) of U-space services implementation. The sixth section aims to propose three different models of airspace structures and related rules, one with low level drone operations constraints, one with middle constraints and the last one with a high level of constraints. Finally, appendix C proposes a realistic view of city authority involvement in U-space from Toulouse Metropole.