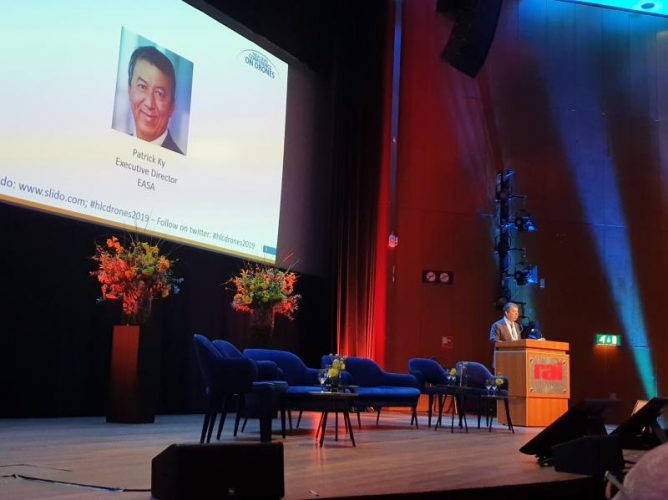 Europe’s air navigation service providers (ANSPs), U-Space service providers (USPs), air traffic controllers and other aviation stakeholders will have to wait until March 2020 to see how the European Aviation Safety Agency (EASA) will address their concerns with the first draft EASA Opinion on U-Space (“Draft Opinion – ‘High-level regulatory framework for the U-space’ (RMT.0230)”),  sent out to stakeholders in October this year (https://www.unmannedairspace.info/uncategorized/european-ansps-have-major-reservations-with-easas-draft-u-space-regulations/). The target date of adoption by the European Commission is the end of 2020.

At the High Level Conference on Drones 2019 during the recent Amsterdam Drone Week EASA said little about the way that competition for providing U-Space services will be organised. ANSPs and USPs are especially concerned about draft regulation 5.5 which they understand will prevent essential U-Space technology providers from being able to compete to provide U-Space services while ANSPs fear they could be prevented entirely for competing for USP services. On this issue it seems most in the industry will only be happy with a radical re-working of the proposed text. “There were contradictory signals coming out of the event,” said one USP at the end of the high level conference. “On the one hand the European Commission was clear that it wanted to see open competition for U-Space services but EASA said nothing about that, merely that it was working hard on the draft and now had a new timetable for delivery.”

The message from EASA was that although some changes will be made the main problem has been a confusion about the message of the draft itself rather than any issue with the detailed contents; EASA is taking a stepped approach to introducing U-Space regulations and this is just the first step.

According to EASA’s Maria Algar Ruiz, Drone Programme Manager at EASA, speaking at the event: “It is very important to talk about the principles of the draft proposal – this is just the first step…. The regulation, like every other regulation, will evolve over time as we gather more experience and we get more results from the demonstrations. The regulation does not contain all the services. Basically it is not aiming to address all the traffic predictions we have from industry for 2035. The regulation is for tomorrow.  That’s why you see things like U-Space airspace as being established as restricted airspace and many people are thinking: ‘why not complete integration?’

“We are thinking these regulations will be implemented by the end of next year and the beginning of the year after, therefore it is a first step, based on what we consider to be mature services and solutions and the assumption that U-Space at the beginning won’t be everywhere…That doesn’t prevent these services produced in other parts of the airspace but the assumption is that U-Space airspace will be in very low airspace or near airports like the LAANC programme of the FAA, or in an urban environment where you need it to address air and ground risk.”

Maria Algar Ruiz’s remarks appear to address one of the key problems with EASA’s U-Space draft Opinion expressed by air traffic controller organisations: whether U-Space services will be treated as stand-alone services or integrated within the wider air traffic management system.

According to a letter of December 6 by the International Federation of Air Traffic Controllers’ Associations (IFATCA) sent to Henrik Hololei, Director General DG Move of the European Commission:

“The fast development of multiple, differing and varying U-space concept (geographical), with a myriad of application possibilities will lower the overall European aviation safety record. At the current stage of technological development and maturity with regard to the potential user of U-space, the only solution for U-space is to be segregated from ICAO airspace.”

Industry will now have to wait until March 2020 to see how EASA will address its concerns in the next version of the draft regulations. For some, a few detailed changes will not be enough – IFATCA, for example, wants to see a radical overhaul of the way the agency has drafted its proposed rules. “IFATCA submits that EASA’s current draft implementing regulation proposal is immature, rushed and fails to meet the EASA standards by far. This has the potential to create a total collapse of the entire European aviation safety system. Ultimately, it will actually impede new technology to be deployed within a realistic time scale,” said the association in an unusually robust communication.

“I can assure you that we in EASA are committed to continue to work together with you to make drones a big success for society,” said Patrick Ky, Executive Director of EASA at the conference. Next year we will have to deal with more complex drone operations in the open and specific categories, he said, and we are starting to see operations in high risk areas such as extended beyond visual line of sight and flying over people. “We are learning lot from the Network of U-Space demonstrators and have been contacted by a number of cities who are going from conceptual phase of UAM to planning operations,” he said.