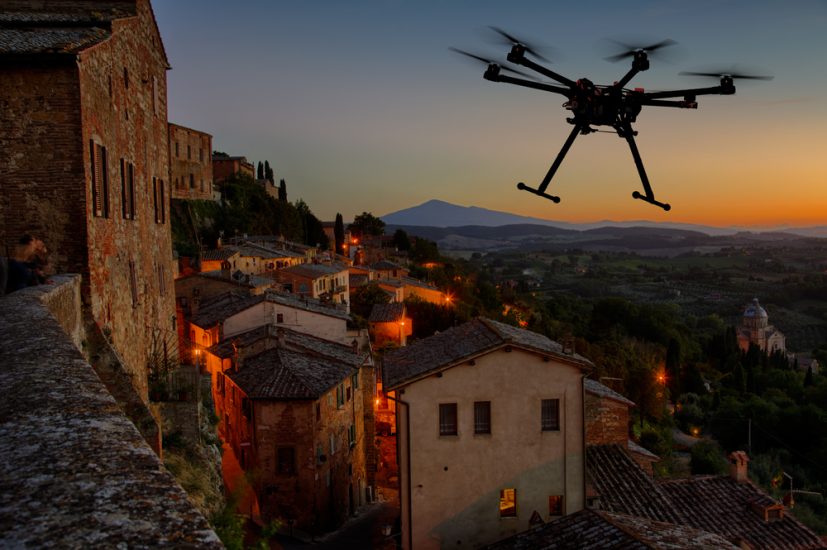 Billions of dollars have been spent by special purpose acquisition companies (SPACs) and governments to develop a first generation of passenger-carrying eVTOL aircraft, with the first of these targeted for commercial operations in North America and Europe by 2024 or 2025. Regulators and standards authorities are working hard to ensure the certification regimes are in place and critical safety-related data can be standardised and streamed seamlessly between stakeholders in this timescale. The first set of vertiport concept of operations have now been published.

And concept of operations for urban air mobility missions, including UTM traffic management systems (UTM) with its related communications, navigation and surveillance (CNS) infrastructure, have now been published. Airservices Australia/Eve[1] and NASA[2] among others, have all developed high level urban UTM concept of operations. The European Union, with its CORUS-XUAM programme[3] will be running six very large demonstration programmes as part of its work to develop a European concept of operation for urban UTM.

Unfortunately, none of these concepts, although giving valuable high level guidance, offer UAM eco-system managers the granularity of detail needed to plan in detail the milestones they will need to reach to develop a UTM system to support hundreds of simultaneous drone and passenger flights. There is no clear roadmap showing the roles of responsibilities of each stakeholder, how scalability will be in-built from day one, the key technologies and their operational performance requirements (especially for communications and surveillance) and the revenue streams which will be required by each stakeholder group to ensure the investment required will generate sufficient revenue. These are yawning gaps which, if left unfilled for long, could delay the implementation of UAM services and add billions of dollars to infrastructure costs – as many elements may have to be retrofitted with systems allowing for the necessary levels of integration and scalability.

While work is underway currently with the FAA in the BEYOND programme[4] and in Europe with the very-large-demonstrator programmes[5]) to fill in some of these gaps.  Perhaps the biggest missing part of the puzzle is a detailed, modular comprehensive map of the “end-state” UAM eco-system, identifying the critical certifiable technologies, standards, regulations and business-cases which will support hundreds of simultaneous drone and passenger eVTOL flights and integration with ground-based transport networks.

But perhaps the first UAM operations do not need one. Eve Urban Air Mobility (EmbraerX) in its work with Airservices Australia and Joby Aviation to design first-stage UAM operational concepts in Melbourne and Los Angeles, has outlined a plan which uses current technology ATM systems and procedures to support the first passenger flights. Melissa Alexiou, A/G Program Director at Airservices Australia, speaking at the May 20, 2021“Connected Skies” webinar organised by the Global UTM Association (GUTMA) reported that following simulations with Eve to look at how air taxis can be integrated into Melbourne’s highly complex airspace: “It is likely that UAM operations could operate within the requirements of the current ATM environment in accordance with existing procedures, or new ones we could easily accommodate,” she said. 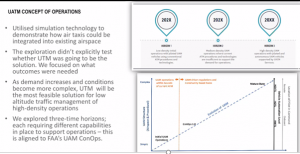 In other words, no fancy airborne detect and avoid system will be required, nor ground-based radar systems to detect both cooperative and non-cooperative targets; the volume of flights in the UML-1/UML-2 stages, to use NASA parlance, will be too few to require these systems.  It is only in when multiple operators are planning to share the same airspace that a UTM system will be required, to make flight plans and UAS tracking data instantly visible to all stakeholders. 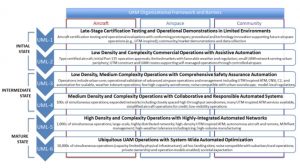 Others in the industry believe this just won’t work. “I contend we need to see the top level view from day one, from at least UML4 and 5 – because if don’t we will wind up making mistakes along with way and not fixing things we need to fix,” said Michael DeKort CEO of Dactle. “Without these views many in the industry, especially those who have to do the real-work in cities, cannot see what all of this means from a volume, complexity and technical solution point of view. Ground and air vehicles will be sharing the same C-V2X bandwidth and that will be a big problem. In the USA the Federal Communications Commission (FCC) has sanctioned cellular at 30MHz with 25MHz usable per second as the only network architecture which facilitates vehicle-to-everything between all entities, air and ground. But this vulnerable to a shockwave when all vehicles broadcast everything they see, flooding the bandwidth And this doesn’t even consider people’s wild idea of putting raw sensor data on the network. And how are drone pilots going to get the video they may need? If I have a common picture of the city’s ground and air eco-system and broadcast it, I can ensure vehicles just transmit their position data and speed, save on that bandwidth, provide one-ground-truth-all-entity-data-set and assist greatly with deconfliction. The model here is the Department of Defense’s Link-16 system. Thousands of ground and air entities managed in an urban battlefield. Since AWACS is a part of that think of the urban version as a City Warning and Control System (CWACS). The technology exists today to do this. What we need is the will to do the system of systems engineering due diligence.”

So what are the real risks to delaying implementing infrastructure based on a modular, detailed view of the end-state eco-system?

The main problem is timing. The sheer number and complexity of challenges to developing an urban UTM system (see box: The core urban UTM technical challenges) are just so many that we may run out of time and the ground infrastructure will not be in place to meet the business plans of the eVTOL sector. The first trial passenger flights are scheduled in Europe and North America for around 2024. But many stakeholders in the UTM eco-system have little or no aviation knowledge.  In particular, city authorities who will be responsible for integrating air and ground systems, including deciding the location of vertiports which can be scaled in line with community priorities, along with approach and departure routes, will need some serious upskilling. Especially as two UTM systems will need to be developed, one for initial trial operations and the second for UML-3 plus operations. Cities normally need around ten years to plan new integrated transport networks, another ten years to develop them and fifty years to manage them.

It may be possible to cut some corners by transferring traditional airborne devices – such as detect and avoid – to ground-based edge computing systems. But these will take time to develop and probably longer to standardise and certify. Then there’s the question of back-up systems. And investment – how much will infrastructure providers such as mobile network operators charge for their services?  Airspace design, including integrated weather alerts and dynamic routings which change according to where crowds move and leaseholder permissions, will also require substantial planning.

Everything is possible – but we are already running out of time if we want to synchronise urban UTM deployment with the launch of eVTOL commercial operations.