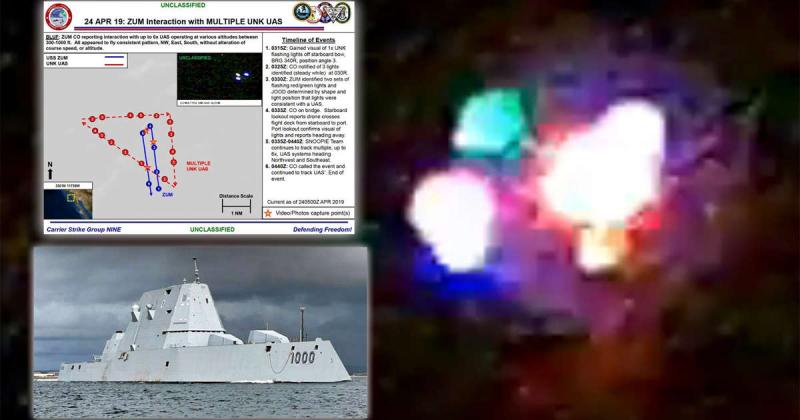 The US Navy has released a new video from the incident in April 2019 when six unidentified drones were recorded flying over its surface combatant vessel, the USS Zumwalt, off the coast of Southern California according to online news reports.

The War Zone requested the video via the Freedom of Information act as part of its research into reports of drone swarm incidents that occurred near Navy vessels intermittently throughout 2019 off Southern California. Previous material includes unclassified video and photographs that provided a significant increase in detail about these strange incidents. The bulk of the drone swarm events occurred in July of 2019.

The incident occurred at approximately 8:30 PM Pacific Time on April 24th 2019, around 17 nautical miles from the Marine Corps base at Camp Pendleton in international waters. During the event, the USS Zumwalt reported that as many as six unknown unmanned aerial systems (UAS) were seen operating nearby at altitudes ranging from 300 to 1000 feet. At one point in the incident, the UAS reportedly crossed over the deck of the USS Zumwalt. As in similar past incidents, the drones were documented by the Ship Nautical Or Otherwise Photographic Interpretation and Exploitation team, or “SNOOPIE team.” These sailors essentially act to document dangerous, uncertain, or unusual situations using a variety of commercial-grade cameras.

The Drive has reported an unnamed former drone industry analyst who commented that “while the video isn’t of the best quality, I don’t see anything on the drone that would make me think it’s something that couldn’t be purchased off the shelf from a current commercial drone manufacturer.” The analyst added, “the fact that the narrator said that there was a pattern of flight where there were no changes in altitude tells me that the drones were either programmed to fly a certain route or controlled from a distance while possibly on altitude hold, which to me isn’t the hallmark of any advanced technology.”

They further commented, “what is interesting is that they reported 6 drones and they were 17 miles off the coast of Southern California. This tells me that these drones were likely launched from a boat and that this was likely a planned ‘mission’ because no one has 6 drones on a boat for recreational purposes.” The analyst further stated that physically capturing the drone “is really the only way a forensic assessment can be made to determine the origin and capabilities associated with an [unidentified] drone.,” reports The Drive.