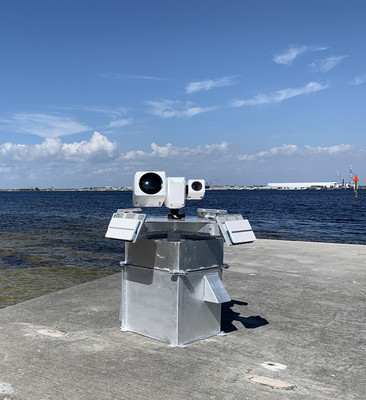 US Naval Surface Warfare Center Panama City Division (NSWC PCD) scientists and engineers have developed a system to autonomously detect, track, and classify unmanned aerial systems (UAS) from the land or sea. The Threat Tracker is a detection system comprised of commercial off the shelf 3D radars and optical sensors according to a report by Naval Sea Systems Command. The equipment will be on display at Sea Air Space Exposition 6-8 April 2020.

“What makes the Threat Tracker unique is that it incorporates machine learning algorithms to autonomously process radar detections, analyse thermal images to assist in video based tracking, and classify tracked targets to determine if the object is a UAS,” said Marvin Peardon, NSWC PCD Threat Tracker program manager. “This is important because it can decide on its own if it is a bird or an actual UAS.”

Another unique feature is the Threat Tracker’s Gyro-stabilized marine platform.

“We developed this system with the ability for it to be mounted on a boat or vehicle,” said Jeremy Johnson, NSWC PCD Threat Tracker systems manager. “The Gyro-stabilized Marine Platform will prevent the imagery from being distorted and possibly misclassified.” Once the imagery is classified, the information is sent to the user’s command and control (C2) system of choice.

“We developed this programme to be able to provide the information collected to any C2 system,” said Peardon. “The user at that point can make a determination about the next step.”

Threat Tracker successfully performed during a recent exercise, and Peardon and Johnson said they hope to conduct operational testing this year.

“Threat Tracker is not currently a programme of record but we will continue to improve the capabilities with the intent that the Navy or another service will find utility in the system,” said Johnson.