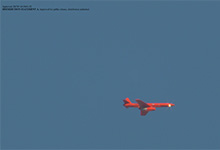 The US Navy used an all-electric high energy laser weapon to disable a drone in February 2022. According to the Office of Naval Research (ONR), the demonstration marked the first time the weapon had been used to defeat a drone in flight.

Known as the Layered Laser Defense (LLD), the weapon was designed and built by Lockheed Martin to serve as a multi-domain, multi-platform demonstration system. It can counter unmanned aerial systems and fast-attack boats with a high-power laser—and also use its high-resolution telescope to track in-bound air threats, support combat identification and conduct battle damage assessment of engaged targets.

The ONR says the drone shoot-down by the LLD was sponsored by the ONR at the US Army’s High Energy Laser Systems Test Facility at White Sands Missile Range in New Mexico. The demonstration was a partnership between ONR, the Office of the Under Secretary of Defense (Research and Engineering) and Lockheed Martin.

The LLD testing supports a broader effort by the naval research and development community, partnered closely with the fleet, to mature technologies and field a family of laser weapons that can address multiple threats using a range of escalating options. These capabilities range from non-lethal measures, such as optical “dazzling” and disabling of sensors, to destruction of a target.

During the recent test at White Sands, the LLD tracked or shot down an array of targets—including unmanned fixed-wing aerial vehicles, quadcopters and high-speed drones representative of subsonic cruise missiles.